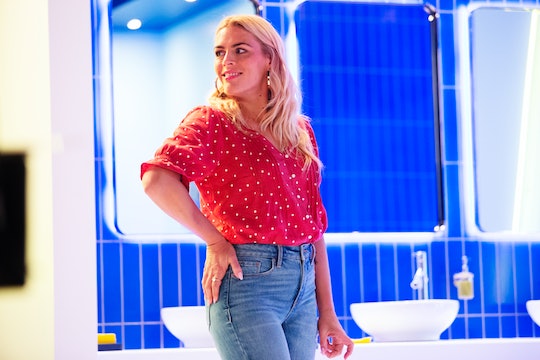 It feels right to describe Busy Philipps' recent "wedding" to herself as on-brand. "I don't know if 40 means the same thing now that it did when we were kids even, you know, but it is obviously a milestone," Philipps explains to Romper of the decision on the cusp of her fifth decade on Earth to fly her family to Cabo San Lucas, Mexico, and renew her commitment to herself, so to speak. "I have been blessed in the first 40 years of life," she laughs, "which is why I threw myself basically a destination wedding."

It has been quite a run. Busy Philipps made her initial splash into Hollywood playing teenager Kim Kelly on the now cult-classic NBC high school drama Freaks and Geeks, which aired in 1999 and 2000. She believes the show's unflinching look at the pain and awkwardness of high school is part of what has made it such an enduring and beloved show beyond its short original run. "When you're in high school, so few people ever feel like the beautiful popular kid. And yet that was kind of all that was ever portrayed. And so to see a show that so accurately depicted what it was like and what it felt like to be an outsider, um, was sort of mind-blowing for most people," Philipps tells Romper by phone.

It was a show made in the late '90s, but set in the '80s, and popularized widely in the 2010s on the heels of Netflix (the cast reunited in 2011), and that, in a nutshell, is the riddle of Busy Philipps, the late-night host, actor, author, producer, and Instagrammer who at 40 embodies a kind of eternally free-wheeling teen sensibility, but is at the same time a mother of two (her oldest, Birdie, will be a teen in just a few years).

The photos I am sent of Philipps' latest campaign mesh with this idea. In the array, she dances around a disco bathroom-slash-lounge in Old Navy denim and high heels, looking less like a slick celeb shooting a spot and more like your bestie goofing off in front of some fancy dressing-room mirrors ("I think you gravitate towards things that, like, feel good when you're wearing them," says Philipps of this dressing-room energy. "I don't think about like, 'Oh that's too short for me, or that’s too whatever.'”). This is classic Busy Philipps. Her projects supra the novel-writing and show-running include partnerships on pizza and juice boxes and pants — attainable items that her followers know intimately.

Not that there's anything wrong with like the moms that want to wear f*cking yoga clothes. It truly just has never been... that's just not my journey.

And the down-to-earthedness feels authentic. "I've always been a person that likes to get dressed up in clothes," she says simply of the Evolution of Busy from Freaks to Dawson's Creek to Cougar Town and to her no-holds-barred memoir This Will Only Hurt A Little. "I've always used those as sort of an expression of my personality."

Even over the phone, Philipps exudes a bubbly energy that is unceasing. She is the gorgeous, funny friend who doesn’t mind making a fool of herself. She is the loyal friend who would fiercely stand up for you against an internet troll or a crappy ex. She is the supportive mom friend who shares her own foibles with all of Instagram to make you feel better about your own. She is, I note, the only late-night host to have built an all-female writer's room for the canceled but anyway terrifically named Busy Tonight. And she is the celebrity unpacking the red-carpet perfection we might associate with her brand.

"Certainly in your day-to-day style, when you're, you know, doing the kid's birthday party runs on the weekends, and the preschool pickups, going to the park with your kids and all that stuff, yeah, [the need for comfort and practicality] does sort of influence you," she says in a nod to the dancing-around-in-jeans situation.

She goes for comfort. But even when bopping around town for errands and kid activities, you're not likely to find her in yoga pants. "I think a lot of the L.A. moms really like workout clothes as all-day fashion. That’s definitely like a thing. Not that there's anything wrong with like the moms that want to wear f*cking yoga clothes. It truly just has never been... that's just not my journey. Like even in college, I wasn't like wearing sweats to class."

So when it came to adjusting to life and style as a mom, Philipps had to find adjustments, taking a live and learn approach. For instance, she quickly realized those beloved vintage Levi's with zero stretch might not work on the playground, where repeatedly bending down could have disastrous consequences. She is adamant that a mom wardrobe is necessary: "The dresses need pockets, your jeans need a little bit of stretch in them. The dresses with pockets thing is very real.

I'm never buying like the super designer clothes for my kids. Like, that would literally no sense to me.

Philipps is quick to admit that while she can and does enjoy shopping designer brands, it's all about balance. "Even when I was in high school, my favorite thing in fashion magazines were always the 'high/low' articles, you know, where they like show you like an expensive option and a comparable budget option." This approach continues to inform her shopping habits today, particularly when clothes shopping for her family. "I'm never buying like the super designer clothes for my kids," she laughs. "Like, that would literally no sense to me. I could win the lottery tomorrow, they’re still not going to be wearing like Dolce & Gabbana!"

Philipps says that prior to her ascent to the position of Old Navy celebrity spokesperson, she was drawn to the brand's breezy style and elevated basics. "I love Old Navy, so much is cute and easy. One of my best friends is from Arizona; I'll talk to her after she posts something on Instagram and I'm like, 'Oh, where'd you get that dress?' I swear to God, like 90% of the time she says Old Navy."

Philipps' daughters Birdie and Cricket, 10 and 5, respectively, are also into comfort. As her elder daughter enters tween life and further develops her own style, her younger daughter remains committed to soft leggings and stretchy options. True to form, she is committed to letting them be themselves and dress in whatever makes them feel good.

"We kind of just allow them that freedom. I'm never gonna tell them not to wear something, truly. I'm not going to put that on my girls. Like, they can wear whatever feels good."

And as for where Freaks' Kim Kelly would be today? Philipps thinks she'd be having a Chico's kind of day. Hear her out: "She'd probably be like shopping at Chico’s, I guess. I always thought that like, Lindsey really influenced her and that she ended up kind of like going straight at some point, So it’s not like she’s still wearing a crop top. I just imagine she ended up going to community college and maybe transferring, graduating from state college, then like marrying some guy and like having some kids and maybe getting divorced and then, like working in a bank, you know what I mean? Just having a totally normal life, which is great. Buying her granddaughters Old Navy."

And maybe, just maybe, preparing to double down on her commitment to another four decades of being herself.