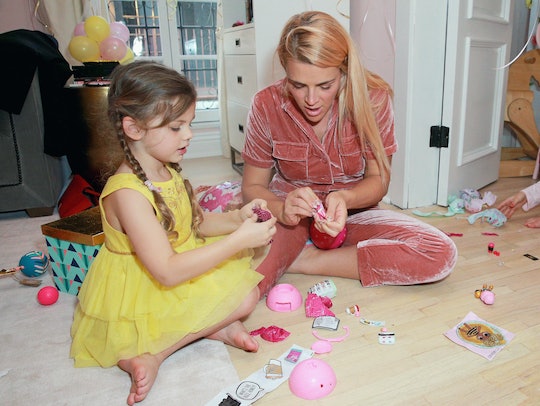 Busy Phillips Will Support Her Daughters, Even If They Follow This Career Path

Busy Philipps has made a pretty excellent second career for herself with her social media posts about her family. It helps that her two daughters are incredibly charming and sweet, of course, and that Phillips herself is an excellent photographer with a kicking sense of humor. There could be a flip side to Philipps' amazing social media skills promoting her family, and it's one she has given some serious thought to as her girls get older. Philipps says her daughters might go into acting, but don't worry she's fine with it if that's where their passion takes them.

The Dawson's Creek actress shares 11-year-old daughter Cricket and 6-year-old daughter Birdie with her screenwriting husband Marc Silverstein. She was on hand at a back-to-school themed crafting event in partnership with Michaels Art Supplies in Hollywood when she spoke to Us Weekly about her daughters. Philipps was asked how she would feel if either of her daughters decided to pursue a career in acting, and she admitted she wasn't sure if her daughters would go that route but she would support them no matter what; "I truly don’t know. Those things kind of appear and I just am one of those parents that I would be happy to encourage my children to follow whatever passion speaks to them.”

Philipps herself has been an actress for decades, working on shows like Dawson's Creek, Freaks and Geeks, CougarTown and more over the years. So she knows a little something about the unique challengers of working in the entertainment industry. But she reminded the news outlet that challenges crop up no matter what you choose to do in life:

Her youngest daughter Birdie already seemed ready to leap into acting in a recent Instagram post, a photo of her on stage which her mother captioned:

Born for the footlights. Waiting for the audience.

Whatever her daughters choose to do for a career later in their lives, Philipps has one specific wish for them; she wants them both to be strong feminists. As she said in an interview with Shape about how becoming a mother to girls helped her to find her feminist voice:

For me, a big part of it is becoming a parent and all that it has entailed—seeing your kids through the lens of the world and wanting for them something better for them. Especially having girls. Again, I have children born immediately into privilege and I still think there’s such a great deal of work to be done for all women. I want them to be aware of that and to be a part of changing the system.

Cricket and Birdie are two lucky girls. They have parents who are ready to support them no matter what they do as a career but they're also guiding them. Encouraging them to question the status quo, to stand up for what's right, to affect change where they can.