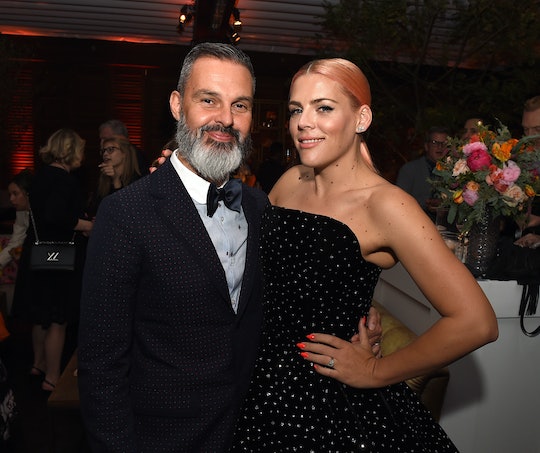 I have this theory that no matter how great you and your partner are as a couple something weird is always going to crop up when you are parenting together. It can be something small like having strong opinions about ear piercing or something major like religion. It's just sort of the way it goes when two people are both trying to figure out how to raise a person who means a whole lot to both of them, but that doesn't mean it's easy. Busy Phillips got real about co-parenting with her husband and I actually think she hit the nail on the head with the whole situation.

The Freaks and Geeks star has been married to producer Marc Silverstein since 2007 and they share two daughters together, 10-year-old Birdie and 6-year-old Cricket. They seem to have a pretty solid marriage, and their kids are clearly pretty happy little people if Phillips' social media feed is to be believed. But all that wedded and parental bliss does not come as easily as you might expect. In fact, Phillips told Us Weekly during a recent interview that she found co-parenting with her husband to be difficult simply because of their different dynamics.

Co-parenting with anyone is really tricky just because you grew up in two different houses. It’s never the things you talk about and plan. It’s always, like, when things go crazy and what you’re default setting is. I will just say that my default setting is a lot louder than my husband’s.

Fights about parenting are all too common in a marriage, as we all know, and I think it's pretty great that Phillips understand where these problems stem from originally. That it isn't necessarily about the two of you being opposed to each other in some deep, fundamental way. A lot of it probably stems from your own history in separate households, just as the actress said.

But still, it's nice when you can find some common ground in parenting. Something Phillips and Silverstein have apparently managed to do together. Despite their differences they can both agree on making sure their kids know they are heard, as she told Us Weekly:

My hope is that Marc and I empower them by making sure that they feel as though their voices are heard, that we set appropriate boundaries for them. Whatever it is that they are passionate about or interested in, we show an appropriate amount of interest. We’re very open. We talk about everything in ways that are age appropriate.

Parenting is pretty much never perfect and here is more bad news, neither are relationships. It's messy and scary and frustrating, especially if you are a person like me who really likes to be the boss of everything all the time.

But at the end of the day if you can figure out a way to work together? To raise your kids in a way that feels good and natural for both of you? That's the sweet spot right there.