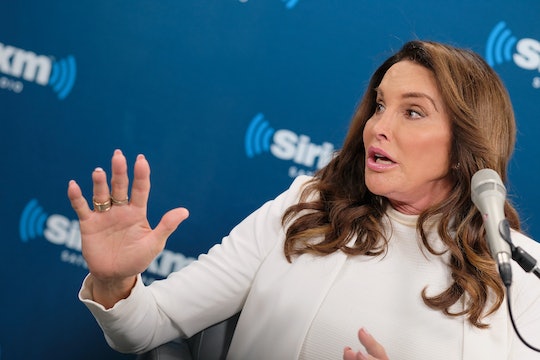 During a stint as a guest co-host on Friday's episode of The View, Caitlyn Jenner responded to Rob Kardashian's Blac Chyna posts with her own manner of very candid opinion. At first, Jenner said she didn't know much of the specifics, saying, "I don't know the Blac Chyna Rob thing," but then quickly offered her take on what she did know: "Rob was stupid for doing that." Wise words.

Jenner continued with her take on the entire situation, remarking that she hasn't had a "serious conversation" with Kardashian in years. Jenner was Kardashian's stepfather before she divorced from Kris Jenner in late 2016. She also revealed she has never met Chyna or her and Kardashian's daughter, Dream Renée. "I've never met Blac Chyna. I've never met the kid," she said. Chyna and Kardashian welcomed their first child together in November 2016, before the couple broke off their engagement the following month.

Unfortunately, that's where Jenner's sage advice ends when it comes to calling out Kardashian for leaking nude photos of Chyna. Jenner continued:

Guys, I know, I used to be over on that team, can be really stupid, okay, and do stupid things. I've tried to warn my kids — all of them, I've got a lot of kids — you gotta pick your friends. And it's tough to do because you can be tremendously deceived.

Cue my internal record scratch. Did Jenner just do what I think she did? Did she really just blame Chyna for what Kardashian did? Because it sure sounded like she just tacitly excused Kardashian's three-hour long body- and slut-shaming social media rant as "boys will be boys" behavior, and that he was somehow "deceived" in choosing Chyna — oh yanno, the mother of his child — as a romantic partner. Representatives for Jenner did not immediately return Romper's request for clarification on her comments from The View.

Jenner's commentary about Kardashian and Chyna had so much potential, but like so many other times in the past, Jenner basically stuck her foot in her mouth with the rest of what she had to say. While her comments about Kardashian and Chyna aren't the most controversial things Jenner has said, they certainly don't help in the greater conversation about sexual privacy, consent, and domestic abuse that has since arisen.

While some could argue that at least Jenner tried, her complete take on the situation was two sensible steps forward and three horrendously victim-blaming steps back. Here's hoping things go a bit more smoothly next time.