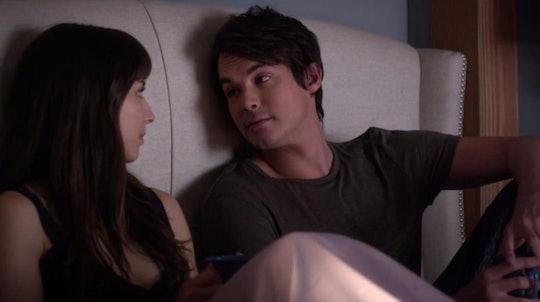 Caleb Professes His Love To Spencer On 'Pretty Little Liars,' But There's A Twist

"Three words. Eight letters. Say it and I'm yours." So technically Blair Waldorf is the one who uttered these words back when our main TV obsession was Gossip Girl, but Spencer basically said the same thing last week when she told Caleb she loved him while he said all the things he just liked about her. However, on Tuesday night's episode it looked like Caleb was finally going to tell Spencer he loved her on Pretty Little Liars.

Speaking through the door, while Spencer, and Hanna, listened, Caleb explained how he was offered a job when he was with Spencer but he didn't tell Spencer about it. Instead he turned it down so he could stay in D.C. with her. Caleb had never admitted that to Spencer before and even though he still didn't really say those three magic words he also kind of did. Although this was a particularly terrible time for him to admit his feelings (Spencer was still cleaning up the mess that comes with burying a body in the woods) it was also an undeniably cute moment. Spaleb shippers everywhere couldn't help but revel in the moment.

Although the Spaleb moment was incredibly cute, Spaleb shippers moment of happiness was very short lived. As Spencer spiraled from the after effects of burying Dr. Rollins' body she found herself in the Radley, waiting for the signal to dump Elliot's jacket. At the bar a (hot) guy bought Spencer a drink and although at first it seemed like she was going to resist his advances, in the end she let him sit down next to her, while they drank and flirted. One thing led to another and in what could possibly be described as Spencer's worst decision to date, she makes out with the guy in the elevator.

Thankfully Spencer stopped herself before they made it all the way up to his bedroom but the damage was already done. To make matters worse Spencer had been avoiding Caleb's calls and when she finally decided to head home to see him (with Hanna's blessing) she discovered that he had packed up his stuff and left.

Does this mean the end of Spaleb? It seems very likely. Even if Caleb returns Spencer will have to decide if she'll confess to her own infidelity and although Caleb technically cheated too it's highly doubtful he'll forgive Spencer. Therefore it looks the Spaleb ship may have finally sunk. Who's ready for the return of Haleb?