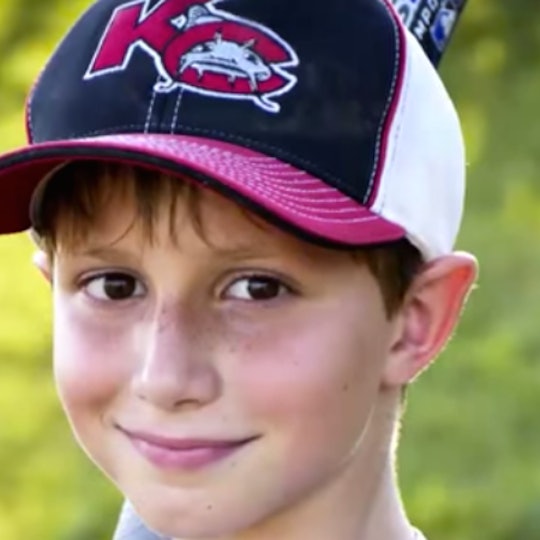 Caleb Schwab's Funeral Deserves Privacy & So Does His Grieving Family

It was a tragic, horrific accident that stunned the nation. On Sunday, 10-year-old Caleb Schwab was enjoying a day at the Schlitterbahn Water Park in Kansas City when he was decapitated on the newly-opened Verruckt water slide. It was the stuff of nightmares for anyone who read about it... but most especially his parents. And while thoughtful, caring people are looking for ways to mourn the tragedy, it's important to remember that Caleb Schwab's funeral deserves privacy. Because his family must be struggling to come to terms with the loss of their son, and it would be hard enough to do without the added stress of public scrutiny.

The ride that took Caleb Schwab's life, the Verruckt water slide (named after the German word for "insane"), markets itself as the "tallest water slide in the world" at 168-feet-tall. Caleb, who is the son of Kansas Rep. Scott Schwab and wife Michele, was on the ride with two unrelated adult females who only suffered minor injuries. Witnesses who were at the park that day reported that Caleb was hurled out of his raft and into the safety netting surrounding the slide after his seat belt came undone; he died of his catastrophic injuries. The accident is still under investigation.

Since his death, hundreds of people have taken to social media to show their support for Caleb's parents. A GoFundMe account was set up by family friend and Caleb's Bible School teacher Michael Persaud to help offset the funeral costs for the Schwab family, and their goal of $15,000 was surpassed in just over a day. Donations have now closed at just over $34,000.

Caleb's father Scott Schwab wrote a message on the GoFundMe page, thanking supporters and talking about his son.

Michele and I want to thank the Olathe, and Kansas City, KS communities and all our friends and family for their out pouring of support and compassion as it relates to the sudden loss of our son Caleb Thomas Schwab. Since the day he was born he brought abundant joy to our family and all those who he came in contact with. As we try and mend our home with him no longer with us, we are in comfort knowing he believed in his Savior, Jesus, and they are forever together now. We will see him another day.

The Schwab family are active members of the Life Mission Church, and lead pastor Clint Sprague spoke to The Kansas City Star about the Caleb Schwab he remembers.

Caleb was a 10-year-old child, but in many ways, he was a man of God. He’s going to be missed for his energy, for his life, for his smile, for the way he lit up a room.

The memorial service for Caleb will be held Friday at Life Mission Church. And while the Schwab family mourns their son, hopefully they will take comfort in the people who have rallied around them for support.

And hopefully, they will be able to put their son to rest in private as they deserve.