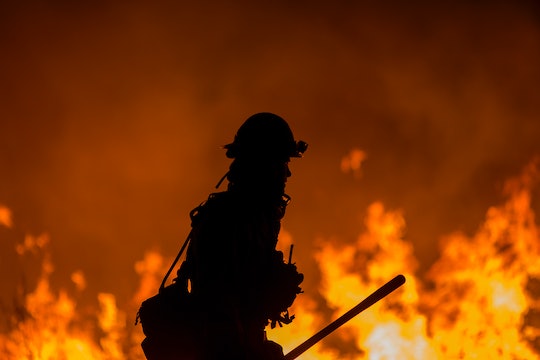 These California Fire Updates Show There's Been A Little Progress

A week ago, California's wildfires took over headlines across the United States, with footage of the fires blazing on TV screens and donations pouring in online from concerned Americans. The initial news may have quieted down this week, but updates on the fires in California show that — despite progress — the devastation is still ongoing.

According to CNN, only 20 percent of the Thomas Fire has been contained so far, which means the thousands of firefighters who have been working night and day to end the blaze still have their work cut out for them. Altogether, the fires in California have already burnt through an area bigger than Boston and New York City put together, racing through 234,000 acres — and $48 million in firefighting funds — as they spread.

An update from California Department of Forestry and Fire Protection, also known as Cal Fire, had more scary numbers to report, as well. As of Tuesday morning, the fires had destroyed 794 structures and damaged another 187. More than 6,000 fire personnel have worked on quashing the wildfires, and more than a dozen organizations are working together to keep at-risk communities safe. The Thomas Fire has already left 90,000 structures, both homes and businesses, without power, according to Reuters.

Unfortunately, experts don't see the fires' spread slowing down. According to Cal Fire, Santa Barbara county will continue to see "significant fire growth" in the coming days, with the communities of Carpenteria, Montecito, and Summerland placed in potential harm's way. The current weather — gusty, with high temperatures and low humidity — is likely to feed the flames and make control efforts more difficult.

Thousands of people have already been forced to evacuate, and many more remain ready to flee their homes. On Sunday, 5,000 people in Santa Barbara were forced to evacuate, and around 18,000 homes are still threatened by the flames, according to Newsweek. Combined, the fires that are currently taking over California have forced 200,000 residents to evacuate, and there's been one death associated with the blazes so far: a 70-year-old woman died in a car accident as she tried to escape Ventura County on Wednesday.

Although the situation is serious, Santa Barbara County Sheriff Bill Brown seemed confident in the state's ability to contain the fire. "This is a menacing fire, certainly, but we have a lot of people working very diligently to bring it under control," he told Reuters on Monday.

Regardless of California's ability to deal with this year's fires, several leaders have warned the public that these devastating events are bound to happen again — and that they're set to become deadlier in future years.

California Gov. Jerry Brown toured the areas devastated by the blazes over the weekend and issued a warning about future fires soon after. "We're facing a new reality in this state, where fires threaten people’s lives, their property, their neighborhoods, and of course billions and billions of dollars," he said, according to NBC. "We know from the changing in the climate that it's going to exacerbate everything else."

According to the Huffington Post, this is the first of California's 20 largest fires on record to take place in December. However, the state has been facing record-breaking temperatures and a long-lasting drought in recent years, leaving California vulnerable to this year's alarming fires.

Jeffrey Mount, a senior fellow at the Public Policy Institute of California’s Water Policy Center, issued a similar warning to Brown's earlier this year. "This has kind of given us a glimpse of what the future might look like," he told the Huffington Post in March, when the state was getting record amounts of rain. "We’re already in a place that has wet wets and dry dries, but those differences are supposed to become even greater over time."

With any luck, the weather will shift in firefighters' favor soon and we'll see these record blazes come to an end. In the meantime, there are several places where you can donate or volunteer to help the victims of California's wildfires.