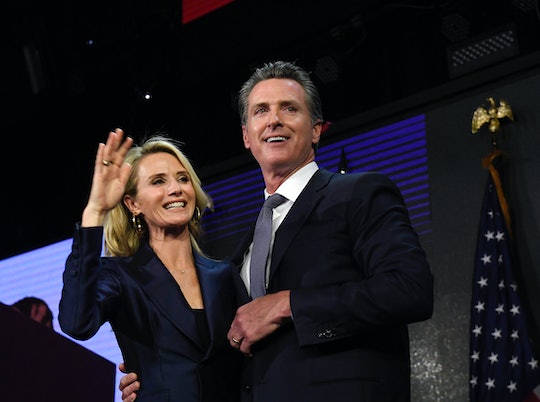 It might seem like a small thing to naysayers, a slight change of phrasing that some might consider unnecessary. But in my opinion, those naysayers are exactly the reason why change is needed. Why new titles that actually make sense in 2019 should be celebrated and acknowledged. So when California's new governor's wife got a different title, it's important to realize that one word is actually changing history. And for all the right reasons.

California Governor Gavin Newsom beat out his Republican adversary, John H. Cox, in November's election, and his documentary filmmaker wife Jennifer Siebel Newsom was on hand to celebrate. Not as the new "First Lady" of California... rather the "First Partner." This is Siebel Newsom's official title, and she's the first to hold it in the history of the country. The updated wording is a serious nod to some long-overdue gender equality in politics after a long, storied history of wives being referred to as "First Lady." Siebel Newsom changed her Twitter bio to include First Partner of California, and the official office of the Governor also included the new wording. Siebel Newsom also acknowledged the newly worded title in a tweet, writing; "Being First Partner is about inclusion, breaking down stereotypes, and valuing the partnerships that allow any of us to succeed. Grateful for this opportunity to continue advocating for a more equitable future - now let’s get to work!"

Siebel Newsom's updated, gender-friendly title should come as no surprise to anyone who is aware of her work; the documentary filmmaker first gained national attention with her 2011 film Miss Representation, a documentary that looked at the way women are often misrepresented in mainstream media. The film, which was written, directed, and produced by Siebel Newsom, also focused on the under-representation of women of influence in media. Since then, Siebel Newsom has started The Representation Project, which uses film and media to "create a world free from gender inequalities."

And now, Siebel Newsom has done her part to change the way partners of those in political office are represented. Which has Twitter excited for the future.

Former California Gov. Arnold Schwarzenegger was one of the first to congratulate the Gov. Newsom and his First Partner, sharing a selfie with the couple on Twitter and writing:

To Governor @GavinNewsom and first partner @JenSiebelNewsom, congratulations and best of luck. It is a great honor to serve the people of CA and I’m proud of you. I am here if you need anything at all.

Of course, Gov. Newsom wanted to make sure his First Partner knew he was "beyond proud" of her with a congratulatory tweet reminding people that gender equality is "all our work."

The title of First Lady has had a long run; since 1886 when President Cleveland's wife Frances adopted the title. But it's time to end it. Time to acknowledge that there could be a woman in office with a husband, a man with a husband, a woman with a wife... all of them partners.

All of them equal.