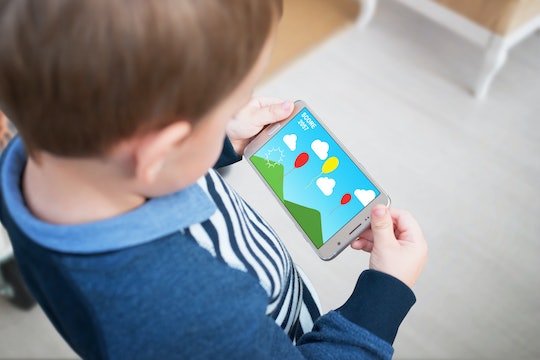 From "text neck" to the depression that social media can promote in teenagers, there are plenty of reasons that people of all ages should consider curbing their cellphone use. And, with its new guidelines about how to avoid radiofrequency energy from cellphones, the California Department of Public Health (CDPH) just called attention to what may be the most troubling dark side of these devices yet. According to the new guidelines, cellphone radiation may actually be harmful to people's health, and, if you believe that the department has to say on the matter, children could be the most at-risk. That doesn't mean parents need to panic, though — the science is a bit more nuanced than "talking on a cellphone equals an automatic death sentence."

However, some of the assertions in the guidelines that the CDPH put out last week do sound downright alarming. According to "some laboratory experiments and human health studies," the report states "long-term, high use" of cellphones could bring on serious adverse health effects such as brain cancer, lower sperm count, and issues with learning, memory, hearing, behavior, and sleep. Honestly, on its face, that makes me want to drive all the electronics in my home to the dump ASAP. But while caution is never a bad thing, that's probably not totally necessary, considering the other available evidence.

Chatter that the radiofrequency energy that cellphones emit in order to communicate with cellphone towers can seriously affect our health is nothing new. It also has never been definitively scientifically proven, as the CDPH report acknowledges. The CDPH only published the guidelines previously after an expert sued the department to make the information public last year. And in the spring, director of UC Berkeley's Center for Family and Community Health at the University’s School of Public Health Joel Moskowitz won the lawsuit, compelling the CDPH to share the information it had feared would alarm and confuse people, according to Gizmodo. The CDPH was also reluctant to make share the information with the public because it was similar to information on the Center for Disease Control and Prevention's website.

In the report, the CDPH cautions that "the science is still evolving," in the same breath as it issues the guidelines for avoiding such radiation as much as possible. Those suggestions include using a speakerphone or handset when using a cellphone instead of putting it to your ear, avoiding using a cellphone to stream audio or video or when the signal is weak, keeping it away from the bed at night, and more.

If there is any truth to the idea that cellphone radiation — which has energies of a much lower magnitude than those of UV radiation, X-rays, and cosmic rays — is harmful to users' health, then it could be a good idea to take some steps to minimize kids' exposure. According to the CDPH report, kids could feel the effects more than adults do because the radiation can reach a larger area of their brains, their bodies are still growing, and they're likely to be exposed for many more years than adults, because now many kids are raised with cellphones in their hands.

In a statement announcing the publication of the guidelines, CDPH Director and State Public Health Officer Dr. Karen Smith addressed the issue of children's exposure to such radiation directly:

We know that simple steps, such as not keeping your phone in your pocket and moving it away from your bed at night, can help reduce exposure for both children and adults. ... Children's brains develop through the teenage years and may be more affected by cell phone use. Parents should consider reducing the time their children use cell phones and encourage them to turn the devices off at night.

All in all, the advice to reduce screen is sounds — whether or not cellphone radiation is as big a problem as the new guidelines out of California suggest it is.