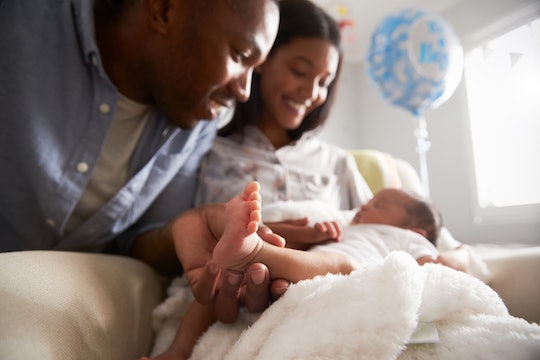 It's no secret that the United States lags far behind virtually every other developed country when it comes to offering paid parental leave, but in one state at least, things may be about to change. On Thursday, newly-elected California Gov. Gavin Newsom unveiled his proposed 2019 budget, and his financial plan means that California parents may get the longest paid parental leave in the United States, according to HuffPost.

But that's not all: while Newsom's leave plan definitely extends the amount of time parents are able to take, it also improves upon current restrictions that dictate who can take it. That's because while the state's current plan focuses primarily on birth mothers, leaving women to bear the responsibility as caregivers while also leaving same-sex partners, adoptive parents, and others on the sidelines, the new parental leave will offer options that are much more equitable and accessible, according to HuffPost.

Newsom, himself a dad-of-four, released his "California For All" budget to the state Legislature Thursday, and though it obviously covered a variety of different issues, his parental leave plan was one that stuck out. According to the Governor's Office website, Newsom's budget is set to expand the current program in place in the state for paid family leave in such a way where "all newborns and newly adopted babies can be cared for by a parent or a close family member for the first six months." Yup, six months.

Currently, new parents in California who qualify are entitled to "up to 6 weeks of partial pay ... to bond with a new child entering the family through birth, adoption, or foster care placement" as part of the California Paid Family Leave (PFL) program, according to State of California's Employment Development Department. After that, birth mothers are also entitled to apply for an additional six to eight weeks of paid leave through the state’s disability fund, according to The Chicago Crusader.

Under the new plan though? Two caretakers would be able to split a combined leave of up to six months, which would likely make it much easier for more Californians to actually participate. And it also means that couples will have more say in how they split their childcare duties — instead of assuming that women who have given birth will automatically be the ones to stay home, dads will now also be able to take time off to spend with their infants.

That's definitely encouraging news, not just because we already know that women who give birth are often expected to go back to work far too soon, but also because families have been proven to benefit significantly when fathers are able to take parental leave. For instance, a 2014 report by the Boston College Center for Work and Family found that when men take paternity leave following the birth of a child, their female partners are more likely to have higher self-reported happiness levels three months postpartum. And a study in Sweden (where almost 90 percent of fathers take paternity leave, according to The Economist), found that mothers' earnings actually increase by more than 6 percent for each month of parental leave her partner takes.

Even with Newsom's improved plan though, which would literally give California the longest paid parental leave in the country, according to The New York Times, the United States will still lag behind most other countries. According to The Data Face, the United States ranks dead last among 36 developed nations when it comes to offering paid maternity leave, while the top six countries offer parents at least a year of paid leave (Sweden takes the top spot with 68 weeks).

In other words? There's still a lot of room for improvement when it comes to paid parental leave, and a huge need for change. But Newsom's plan seems like a really valuable first step, and hopefully, it will be one that can eventually set an example for the rest of the country.