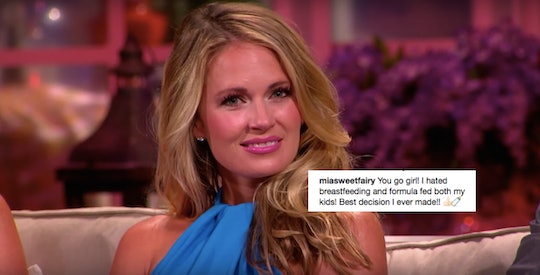 Cameran Eubanks Got Honest About Why She's Quitting Breastfeeding, & Moms Are Here For It

When the Southern Charm star got pregnant, she got a whole lot of unsolicited questions about whether or not she'd breastfeed. Now Cameran Eubanks is giving up breastfeeding, and her post about it so important.

Eubanks and her husband, anesthesiologist Jason Wibley, gave birth to their daughter Palmer Corrine Wimberly, who weighed 7 pounds, 3 ounces, on Nov. 11, according to People. In September, shortly after Eubanks announced her pregnancy, she posted a "PSA" on her Instagram account letting followers know that she was done with people asking her if she'd breastfeed when they baby arrived. "First of all, it's none of your dang business how I plan to feed my child," she said. Fans of the TV star commented, "omg I love this woman" and "I can't stop watching this. You are amazing."

And now, almost five months since posting her PSA, Eubanks has taken to Instagram again to share another notice. This time, she said that she's "DONE with breastfeeding," and that she "gave it a good almost 3 months and [now she is] retiring the boobs." She made it a point to add that she's not quitting because her milk supply dried up or because she's sick, which is why many mothers do quit breastfeeding early; rather, she's quitting because she simply doesn't want to do it anymore. It's a "choice," she said, adding that she's expecting lectures and judgement. "You are NOT a bad mother if you don't like breastfeeding," she wrote. "A happy Mama is the best gift you can give your baby. (At least in my opinion.)"

Mom followers rejoiced in Eubank's post. One fan wrote: "I hear ya. No mom should be judged! Breastfeeding is not for every mom. I wasn't into it either." Another said: "Did the same thing Cameron. Have a good whirl for 3 months but was over it. I applaud women that can last longer but don't hate on women that don't. I didn't even try on the second child. Was too scurrrred. Lol. Congratulations on baby!" And another added: "👏🏻👏🏻👏🏻 I didn’t breastfeed either of my kids and was made to feel like a terrible mother. 🤷🏼‍♀️ It was SO NICE that my husband could also get up during the night to feed them!"

But, still, far too many people feel somehow deputized to probe pregnant women and new mothers alike about their choices — and then criticize them for those choices. New moms hear a lot of, "Was it planned?" and "Should you really be eating that?" and "Was it natural?" and "Why would you dress your baby like that?" Breastfeeding, particularly, is a hot topic despite the fact that a lot of women actually stop earlier than recommended, the Centers for Disease Control and Prevention (CDC) reported. (Mostly because of a lack of structural support for breastfeeding moms, but often just because they want to as well.)

According to the 2016 Breastfeeding Report Card by the CDC, many American women (81.1 percent, in fact) start breastfeeding their babies after they give birth. And it comes with a ton of benefits — it could reduce the risk of hypertension in moms, according to Science Daily; it could reduce high blood pressure post-menopause, according to Reuters; and it could halve the risk of diabetes in moms, according to The New York Times. Moms who breastfeed also have a lower incidence of breast cancer, heart disease, ovarian cancer, osteoporosis, rheumatoid arthritis, obesity and more, according to Women's Health Mag. For some breastfed babies, incidences of pneumonia, colds and viruses are reduced, and the risk of infant death is cut in half, Fit Pregnancy reported.

But it can also make women's breasts hurt and cause their skin to crawl, and extended breastfeeding is said to lead to infertility in some mothers and sometimes malnourishment in babies, according to Babygaga. Mothers who breastfeed too long are also warned that their babies may become to dependent. And some women, like Eubanks, just don't feel like doing it anymore or at all, which is equally valid. Breastfeeding is time consuming, sometimes painful and can detract from a woman's life since some women won't drink or will avoid certain diets to keep their milk supply healthy. And, there's a huge lack of breastfeeding facilities available to working women.

Ultimately, a lot of women have a lot of different, conflicting opinions on breastfeeding — how to do it, how long to do it and if mothers should even be doing it at all. Moms (and women in general) are often damned if they do, damned if they don't. That's why Eubanks' post struck a cord with the mothers who have had it with the constant questions and remarks about their choices.

We're all entitled to make our own — so let's also make the choice not to mom-shame while we're at it, shall we?