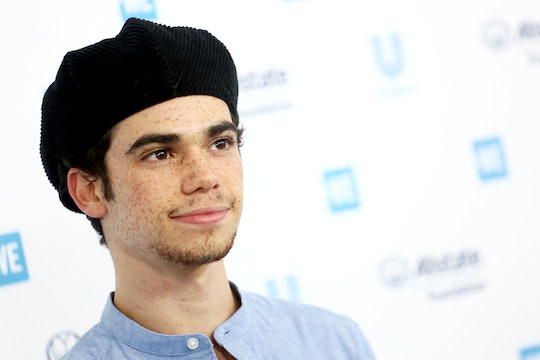 Disney Channel fans were devastated when actor Cameron Boyce died unexpectedly in July following a seizure. He was only 20 years old and many may not have known the actor had epilepsy. However, four months after his death, Boyce's parents have made a touching PSA to help raise awareness about the neurological disorder.

The Jessie and Descendants star died on July 6, after suffering a seizure in his sleep. Not long after his passing, Boyce's cause of death was ruled a sudden unexpected death in epilepsy, according to the coroner's report obtained by Variety, though his parents, Victor and Libby Boyce, had already confirmed their son had epilepsy ahead of this news.

Four months after losing their son, the Boyces are working to raise awareness for the very thing that claimed his life. "We don't want anybody to lose their child to anything," Boyce's father, Victor Boyce told Good Morning America on Wednesday. "Because this feeling is just the worst. And, you know, no parent should have to go through this."

The new PSA features images and video of Cameron, along with an important message from his parents and friends. "We had no idea SUDEP — sudden unexpected death in epilepsy — could take Cameron from us," Libby Boyce says to the camera.

They go on to explain that while SUDEP is rare, epilepsy is not. In fact, 1 in 26 people will develop epilepsy in their lifetime, according to the Epilepsy Foundation, and 1 in 1,000 people in the U.S. die every year from SUDEP.

"Lack of awareness about his brain disease is shocking," his father continues. "Upsetting," another person says. "Unfortunate," Libby adds. "It's time for that to change."

The PSA wraps up with the announcement that the Cameron Boyce Foundation has partnered with the Epilepsy Foundation in the fight to end epilepsy. Viewers are invited to visit KnowSUDEPNow.org to learn more.

After Boyce's death, expressions of love for him and support for his family flooded social media. Even former First Lady Michelle Obama posted a touching memorial to him.

"We've heard from doctors throughout the country that people are coming in and asking about their epilepsy because of Cameron," Libby told GMA. "So that makes us feel good that maybe everything isn't in vain, you know — that people are going to learn about their disease."

Libby and Victor hope that by shedding light on SUDEP, more money will be raised for epilepsy research, and the disease will ultimately be ended. All because of Cameron. Visit KnowSUDEPNow.org for more information on how to get involved with the cause.