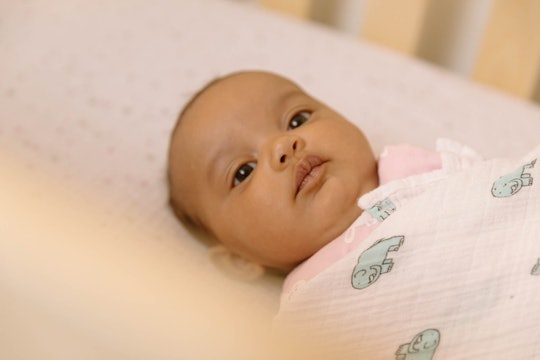 Babies *Can* Get Strep Throat, But Here's How It's Differs From Older Kids

At some point, every winter, my daughter comes home from school with a sore throat. I watch her symptoms closely, monitoring for any signs of strep throat. Luckily she can communicate with me, telling me exactly how she feels and where it hurts, but if you are the parent of an infant, illnesses can become a guessing game. If strep has been making the rounds in your area, you should know, can babies get strep throat?

Unfortunately, babies can in fact get strep throat, but it may not present the way it does with older kids. In an interview with Romper, Pennsylvania pediatrician Dr. Jarrett Patton says that infants can be infected with the strep bacteria, but they don’t have the severe complications of strep that older children have. “As a result,” explains Patton, “infants do not need antibiotic treatment for exposure to strep throat.”

Gina Posner, M.D., a pediatrician at MemorialCare Orange Coast Medical Center in Fountain Valley, California tells Romper that everyone can get strep throat, but it isn’t usually tested for or treated if the child is under the age of 3. She says this is because with babies, strep throat often self-resolves and there is a low risk of it causing rheumatic fever. “Often, I will test if a child is symptomatic and has a sibling with strep,” says Posner, “because I do see it reducing the amount of time they are miserable if they do get antibiotics.” But the reality is, she adds, these babies don’t really need to be treated.

So what exactly is strep throat, and how do kids get it? According to the Mayo Clinic, strep throat is a bacterial infection caused by the group A Streptococcus bacteria that can spread and infect the tonsils, middle ear, sinuses, skin, and blood. This bacteria is highly contagious, the article noted, and can be transmitted through airborne droplets — like from a sneeze, cough, or surfaces touched by an infected person that had not washed their hands after wiping their nose or putting their hands in their mouth. The Mayo Clinic mentioned that strep throat occurs most commonly in the late fall and early spring (although it can happen at anytime) and is most commonly seen in young children and places where people are in continuous close proximity to each other.

Symptoms of strep throat in older children, explained New Kids Center, can be more severe than in babies, but babies with strep throat still may present some mild symptoms, including difficulty swallowing milk and a general fussiness throughout the day. The article noted that babies and toddlers with strep can also have a fever, thick or bloody nasal discharge, a lack of appetite, swollen neck glands, or a scarlet fever rash. The scarlet fever rash, a typical signal that tells me my daughter has strep throat, usually shows up as red splotches along her face and hands, but can also show up on the neck, legs, and trunk of the body.

If you do see signs of strep throat in your baby, definitely head to the doctor’s office. Your pediatrician will probably swab your baby’s throat with what looks like a long q-tip to test for strep bacteria. New Kids Center noted that if your baby’s throat culture indicates the presence of strep bacteria, your doctor may prescribe a course of antibiotics. You can also use a cool mist humidifier in their room to make their breathing easier on the throat, the article suggested, and give them acetaminophen for pain — with your pediatrician's consent.

Luckily, babies aren’t exposed to as many surfaces as older kids, so it may be easier for you to take preventative measures with them. Just make sure that infected children or siblings do not sneeze or cough near the baby, and that things like bottles and binkies are being handled with clean, germ-free hands.

More Like This
6 Bizarre Superstitions About Christmas Babies
Baby Growth Spurts: When They Happen & What To Expect
25 Winter Solstice Baby Names For Your Magical Little One
41 Strong & Sweet Baby Boy Names That Start With “K”