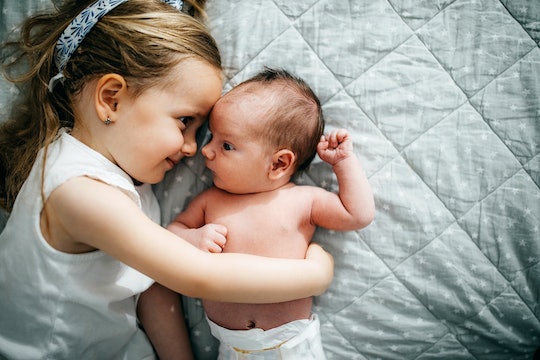 Can Babies Recognize Sibling Voices When They're Born? Experts Explain

I’ll never forget the first time my son responded to my voice. Not long after he was born, he was on my chest and I told him I loved him, and he turned toward me. It was a sweet moment, and one science told me to expect, but can babies recognize sibling voices when they’re born? I love imagining a baby turning to the big toddler in the house like, "Hey. I know you, too. You're the one always screaming about Paw Patrol."

Pediatrician Daniel Ganjian tells Romper that studies have shown newborn babies respond with “recognition brain waves” to sounds they heard while they were in utero. “That means they recognize mom, dad, brother and sister's voices — as long as they were present and talking during the pregnancy,” he says. “Of course, babies' nerves and muscles are too immature to respond with movements when they recognize a voice, but their brains are mature enough, and that is why they produce the recognition brain waves.”

Ready for your mind to be blown? Babies can hear voices and respond to sounds and other human interaction as early as 40 days after conception, according to Ganjian. So he suggests speaking nicely around your baby in the belly from a very early period. And that makes me feel super warm and fuzzy.

Additionally, OB-GYN Kim Langdon tells Romper that babies can respond to sounds at 15 weeks, and movement around 13 weeks. “As a witness to my own baby reaching out to an ultrasound probe, they may be able to respond to touch very early. It’s probably before 12 weeks, since they can move around in the uterus at around 10 to 12 weeks — as they move, they touch their umbilical cord, the uterine wall, etc. — and then react to it by moving away or moving toward a structure.”

Ways to help your baby potentially recognize voices and sounds include having mom read out loud to the baby a lot while they’re in utero, and having other family members talk and/or read a lot, whether that’s to you directly, or the fetus, Langdon says. I love this idea so much, and I think it could be such a fulfilling, bonding experience for your older child to know that their little sibling is listening to them. (It might be the last time they listen that nicely.)