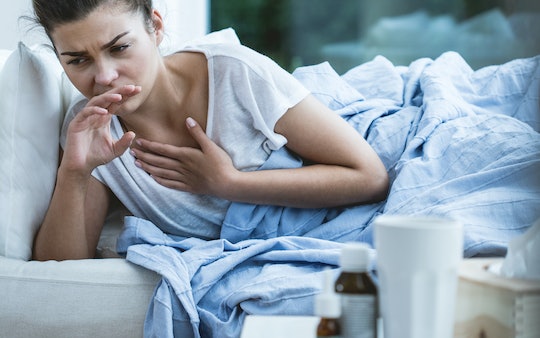 Can Babies Tell If You're Sick & Do They Care?

It's a well-known fact that parents don't get sick days. Even if you're feeling totally crummy with a cold, fever, or stomach bug, diapers still have to be changed and babies still have to be entertained. But can babies tell if you're sick? Are they willing to let you binge on Netflix all afternoon so you can get some rest? (Spoiler alert: no.)

Babies may not be able to tell if you're feverish or feeling sick to your stomach, but they can tell if you aren't at 100 percent. According to a study in The Official Journey of International Society on Infant Studies, toddlers could understand if a person's emotional response doesn't make sense. If they are distressed in a positive situation, for example, toddlers noticed. So if you and your toddler are playing happily together, but your child notices that you're holding your head, acting sick, or otherwise upset, they can pick up on the fact that you may not be 100 percent.

But The Bump noted that the same researchers conducted a study on babies to see how they reacted to negative emotions. The study found that babies were empathetic to an adult who was sad and distressed and were willing to help an adult, like if they were acting sad about not being able to reach a toy.

So your baby can tell when you're not feeling 100 percent. But can they tell if you're actually ill? Not quite. They may, however, mimic the way you're feeling, too. In the journal Psychological Science, a study determined that stress was contagious between mothers and babies. It's more than just your baby knowing you're stressed, they will also mirror your stress.

Aside from your little one being as distressed as you, the fact that they recognize your sadness and will want to help can be a huge benefit. Maybe they will let you binge on Netflix. Or maybe they'll just know you're not feeling great and try to curb back on their tantrums. Either way, everyone has an off day, so push on through and know that your baby may not be ready to make you chicken noodle soup, but they can tell if you aren't feeling 100 percent.