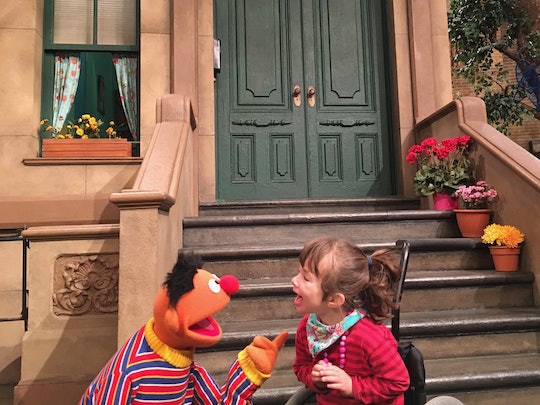 Can Big Bird Help Our Kids Recover From Trauma?

I have witnessed first-hand Sesame Street’s ability to heal a child’s soul: Last fall, my daughter Esmé visited the Sesame Street set and struck up friendships with several of the Muppets there. Months later, those interactions with her “Sesame Street friends” are still clearly in the front in her mind, appearing to have solidified so much for her about friendship, communication, and belonging — so important for a child who, at 7 years old, is still unable to speak, walk, and interact with other children in typical ways. While my daughter’s experience with Sesame was more hands on than most, Sesame Workshop, the non-profit behind Sesame Street, wants more of our most vulnerable children to access the healing power of the Sesame Muppets to address trauma.

One such effort is Big Bird’s Comfy Cozy Nest, an online game Sesame Workshop developed last year to help children recovering from traumatic experiences. Childhood trauma has recently been in the news as parents and psychologists witness the impact family separation has had on child migrants who in some cases have stopped talking, and in others don't recognize their parents, reported the New York Times. But childhood trauma is more prevalent than many people realize. Kristin Cook, digital producer at Sesame Workshop, spoke about the need for a game like Big Bird’s Comfy-Cozy Nest at the Games for Change Festival last month. According to Cook, childhood traumas are “one of the largest health epidemics in the United States,” affecting one-half of children under the age of 18. Of those approximately 35 million children, one-quarter are under the age of 5. These numbers are sobering.

What comfort can a game offer children struggling with the effects of trauma? As parents, we tend to worry our children have too much screen time, but perhaps games can fill an important need.

Cook explains that the Sesame Street in Communities resources, which are geared toward children up to age 6 along with their caregivers, cover a lot of daily life issues, like healthy eating. However they also cover tougher topics like grief, incarcerated parents, and divorce. “We’ve never stayed away from difficult topics,” Cook says.

Sesame Street in Communities wanted to provide comfort and teach coping strategies for children dealing with the effects of childhood traumas, such as witnessing violence or experiencing abuse. “Our mission is to help kids become stronger, smarter, and kinder, so this is exactly in our wheelhouse,” Cook says, because these traumas can interfere with all aspects of a child’s growth including their physical wellbeing, learning, brain development, and social skills — as well as on their health in later life.

Big Bird explains that he has learned that when he is upset to he can create a safe space in his mind.

Children who have experienced a trauma need positive strategies to help them cope with their feelings, so that they can continue to grow and learn. Teaching those strategies — especially to young children — can provide a challenge because communication limitations can interfere with a child's ability to express their feelings or to identify what works. However, Sesame Workshop has a secret for how they can broach these difficult topics in a way that is comfortable for children: The Muppets.

Cook explains, “the Muppets, who are the perfect ambassadors for stuff like this, they are so kind, and kids listen to them. They can really approach these topics in a way that others can’t.”

It makes sense that the Muppets would be the perfect friends to help children through trauma — we are used to them teaching kids how to count and identify colors — but why use them in a game? Cook says, admittedly, it was not obvious at first that a game might help a child deal with trauma, but offered a way for kids to participate in the lessons, and feel like they had support.

These strategies, like the deep-breathing exercises that happen at the beginning and end of the game, require practice. Cook said she realized they could create “tiny little games” within the game that demonstrate helpful techniques the children can use. “I knew if we could create something fun that they would want to play over and over, maybe they could internalize that strategy.”

Along with the game, the online trauma resources include videos, articles, and printable coloring sheets for children and their caregivers. Big Bird functions as the main ambassador for all these resources. He was the clear choice for helping children deal with their trauma because, as Cook puts it, he is a “a big bird with big feelings.”

In the game, Big Bird explains that he has learned that he can create a safe space in his mind when he is upset. In the virtual space of the game, the child helps Big Bird physically build the nest by coloring the nest, selecting items like pillows and toys to fill the nest and so on, in the process learning that they, too, can do this in their minds, anywhere and anytime.

When Big Bird’s Comfy Cozy Nest launches, a cartoon Big Bird appears sitting in his nest. He says, “When I have big feelings, like when I’m feeling sad or scared, sometimes I don’t know what to do. My friend Alan taught me how to imagine a place where I can feel safe and calm. Do you want to help me imagine my comfy-cozy nest?” He continues, “The best thing about imagining your safe place is that you can do it anywhere. Just close your eyes and take three belly breaths.”

As the child clicks on his stomach, Big Bird then demonstrates the technique for taking three big “belly breaths,” and then prompts the child to do the same. This opening series allows children to get them into the calming space of the game, and it also gives kids the first take-away tool: deep, calming breaths.

Inside the game, the child can control the environment of the room and the nest — selecting the music that is playing, painting the walls of the room and nest, and selecting decorations like pillows, and mobiles. The children are also steered toward a toy chest next to the nest; inside it are four mini games that are open-ended “mindfulness” experiences geared toward giving children emotional tools to use outside of the game.

There is a teddy bear to pat, who prompts children to hug themselves for comfort. There are bubbles you can blow and pop, with Big Bird suggesting the kids imagine putting their big feeling inside a bubble and popping it. There is also a snow globe with a Sesame Street scene and chimes you can play, demonstrating the power of observation and comfort of familiar things to calm the mind.

My daughter doesn’t play games, but this is not the kind of frenetic experience I typically think of when I imagine gaming.

Susanna Pollack, president of the non-profit Games for Change, explains that while, like all media consumption, it is important to use moderation in gaming, there are benefits inherent in gameplay, including increased tenacity, focus, resilience, and problem-solving. “There are inherent benefits and even developmental opportunities for kids just by playing any game,” say Pollack.

As the president of Games for Change, which was founded in 2004, Pollack works to bring together game creators and social innovators to use games to drive social impact.

Games like Big Bird’s Comfy-Cozy Nest are designed with a particular social-emotional benefits in mind, allowing children to engage in empathy, experimentation, and skill acquisition.

“Even the youngest of players can have that experience in a non-text environment. So, I think there is huge potential to create worlds, experiences, where youth can learn those skills in a safe and fun environment,” says Pollack.

These are the kinds of games that Pollack and Games For Change are helping children learn to produce in their annual game design program and competition — where children are challenged to produce games around one of several themes. This year one of the challenge themes was empathy. “I think that one of the strongest opportunities that games have involves social-emotional learning is to be able to see an experience through someone [else’s] eyes,” says Pollack.

The ability to produce content imagined through someone else’s eyes, comes naturally to the teams at Sesame Workshop. With the help of the Muppets, they approach all the Sesame Street content from a "child’s perspective,” asking, “How can we talk to them on their level to help them when they are most in need?”

If the Sesame Muppets are the experts in how to connect to children, Sesame Workshop also turns to other (less furry) experts in creating their Sesame Street in Communities content. “One of the first things we do is go out and find people who are experts in the field,” Cook says. The team working on trauma turned to experienced psychologists and social workers who work with children who have experienced childhood trauma to advise them on the curriculum and strategies to include in their resources. And then, Cook explains, it is a matter of understanding how Sesame Street can best provide support.

“We are not trauma experts, by any means... We are there to be there for you, to show you that there is a community and you’re not alone.”

Sesame Workshop hopes that this sense of community and the coping techniques that are being taught through the game will reach many of the children who most need them, and that they will help children who have experienced childhood trauma.

The feedback has been positive. Caregivers have seen children learn and use the techniques, and can follow along as they play. The designers look for signs that the children are interacting with the game, looking to see, for example, does the child take three deep belly breaths with Big Bird?

“We’re not trying to tackle the world with one game…this kid knew what to do when Big Bird told him to do the three breaths, and he did the three deep breaths.” Cook explains, “So, for us that’s a success.”

And, when you consider what is at stake, I absolutely agree.