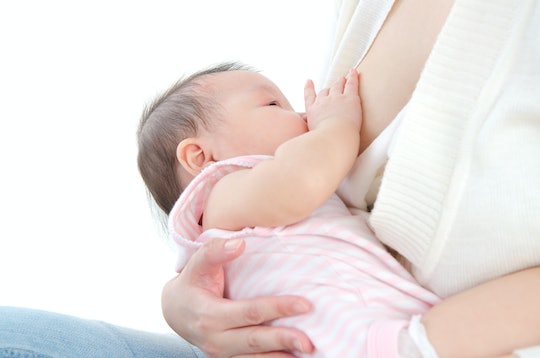 Can Breastfeeding Cause Anxiety?

Motherhood causes a lot of things — sleepless nights, moments where you think your heart might literally burst out of your chest, and anxiety. Whether you're anxious about your little one's cough or if they're ever going to sleep through the night, the anxiety is there and it's incredibly real. For moms who breastfeed, that anxiety can be compounded by things like latch issues, milk supply, and being the sole provider of a human being's nutrients. But can breastfeeding cause anxiety? It's a loaded question — there's really a lot happening in terms of motherhood, breastfeeding, and anxiety. It's important to determine exactly what anxiety is and how it correlates with feeding your baby.

According to Mayo Clinic, there's no real answer as to what causes anxiety. Anxiety can be triggered by traumatic events, life experiences, and it can be inherited. In the case of breastfeeding and anxiety, it's obvious that the life experience of motherhood — of having just given birth, and of literally using your body to keep your baby nourished and well — can bring on those anxious feelings. But does that mean breastfeeding itself causes anxiety? There's a lot going on with your hormones, so surely something could explain why you're so anxious all of the time.

And it's true. Think of all the moments in media or books that mention breastfeeding. Chances are, the woman is blissful, her baby is latched perfectly, and she's loving life. Rarely do you see the woman frustrated because her baby won't latch, or the woman whose nipples are cracked and bleeding, making her baby fuss at the breast, or the woman who is so exhausted from cluster feeding that she wants to give her baby a bottle of formula so she can sleep. None of those women in the media's portrayal of breastfeeding look anxious — they look quite the opposite.

O'Connor goes on to say that anxiety about breastfeeding can also be caused by the lack of education. "Breastfeeding is rarely taught in schools — medical school, college, high school, elementary school — but because we know how important it is, people are told to do it, but with little instruction," she says. "Moms are reinventing the wheel over and over."

That anxiety makes even more sense, right? When your baby is struggling to latch and all anyone can tell you is to "keep trying because it's natural," of course you're going to become unhinged. O'Connor also suggests that the act of giving birth can also affect how you look at breastfeeding and your anxiety. "We also forget that birth has an impact on how breastfeeding goes — birth effects both mom and baby," she says. "These days, birth is so controlled and medicalized so that the instincts of both moms and baby are sheathed by drugs." How can you feed a baby with your own breasts if you don't know how to begin or if you're still reeling from the shock of, you know, pushing a human being out of your vagina (or having one cut from your body)? Oh, and now you have to raise this baby to become an upstanding individual. No pressure — just use your boobs.

While O'Connor suggests that the portrayal of breastfeeding in society (and the medical community, to an extent) can be the reason you feel so anxious while nursing, a little science could make you feel better. According to Breastfeeding Today, a publication by La Leche League International (LLLI), breastfeeding can actually help solve some of your anxiety. Breastfeeding is anti-inflammatory, which can not only improve your overall health, but help lower your stress response, therefore decreasing your anxiety (and depression) levels. The article also noted that, overall, breastfeeding mothers get more sleep than moms who formula feed. Even though the average amount of extra sleep is only 20 minutes, research has found that its enough to make a difference in how a mom feels overall, and her mental health.

But despite all the research, O'Connor says the issue still remains — moms want to do right, but they have no idea how to and they feel totally lost. "The medical support team often has little knowledge to help these moms," she says. "So when some of the moms stop breastfeeding and the pressure is off, they feel better, therefore it seems like breastfeeding is the cause of their anxiety, whereas the culture is really to blame."