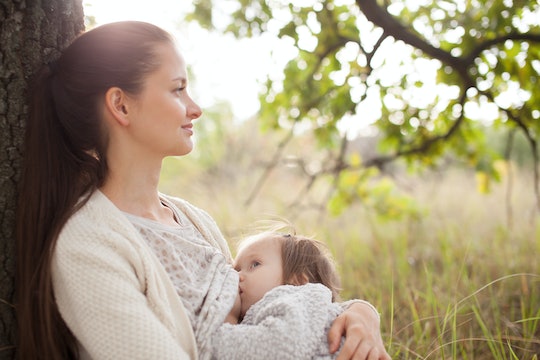 How Breastfeeding Can Induce Labor, According To An Expert

My daughter stopped breastfeeding when she was 22 months old. What started as a natural less-milk-more-food process eventually transitioned into no breastfeeding at all. We never even weaned — it was as if one day she woke up and just never asked to breastfeed again. She's 2 years old now, but I still see nursing mothers and wish I could do it all over again — that bonding time was precious. And I know I'm not alone in my sentiment, so much so that many women continue to breastfeed even after becoming pregnant. But can breastfeeding induce labor?

"The stimulation of the nipples [in breastfeeding] is similar to sex in that it releases oxytocin which can stimulate labor," Leigh Anne O’Connor, an International Board Certified Lactation Consultant (IBCLC) and parenting coach, tells Romper in an email interview. "Many women who are past their due date will use nipple stimulation to help with induction."

According to Kelly Mom, oxytocin is not only important to breastfeeding because it causes milk to eject from the breast, but birth because it does the same for uterine tissue, resulting in contractions. But contrary to popular belief, "the uterus is not at the beck and call of oxytocin," Hilary Dervin Flower noted for Kelly Mom. That means under normal circumstances, the amount of oxytocin released during breastfeeding isn't enough to trigger labor.

"The serial rule when nursing a toddler while pregnant is that you can continue unless you're at risk for preterm labor and your midwife or OB-GYN has told you to refrain from intercourse," O'Connor says.

If you do continue to breastfeed while pregnant, then there are a few things to keep in mind. First and foremost, be sure to keep water and healthy snacks on hand to not only produce breast milk, but provide adequate nutrition for your growing baby. Consider also that your nipples and breasts may be more tender during pregnancy, and that a verbal toddler might announce that your breast milk tastes different, according to Baby Center. That's because toward the end of pregnancy, breast milk changes to colostrum to prepare for a new wee one.

As always, check with your healthcare provider before making decisions that may affect the health of your pregnancy. But, barring a specific health condition that could lead to preterm labor, you are probably in the clear.

And do yourself a favor? As my mom says, "take snapshots in your mind" of those special breastfeeding moments. They, like everything with growing children, won't last forever.

More Like This
Why Does My Baby Cough While Breastfeeding? Experts Explain
Is It Safe To Pump While Pregnant? Experts Weigh In
Is Vape Smoke Bad For Pregnancy? Experts Explain The Risks
Mom Gives Birth To Record-Breaking 16-Pound Baby
What Parents Are Talking About — Delivered Straight To Your Inbox