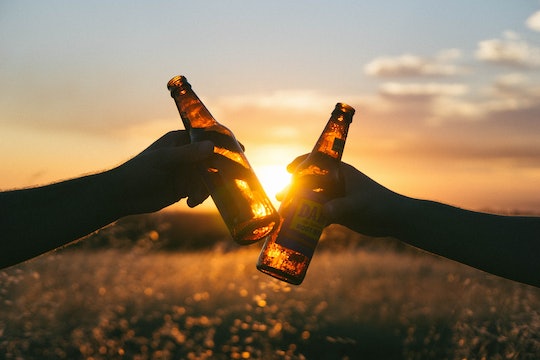 5 Things Your Partner Shouldn't Eat When You're TTC

No matter where you are on your trying to get pregnant journey, it's obvious that women seem to bear the brunt of the responsibility. You're the one examining your cervix, taking your temperature, and ditching coffee and gin. But what about your partner? Can certain foods affect your partner's fertility, too?

As it turns out, there are a few things that are capable of affecting your partner's little swimmers, and it's not just bike riding and tight underpants. Sometimes, what they eat is just as important as what you eat when you're trying to conceive. Everything from booze to brownies can potentially affect his fertility.

At the top of the list is alcohol. According to an article in The Guardian, just five drinks per week is all it takes to decrease the quality of a man's sperm. On the flip side, however, drinking up to seven glasses of wine per week is associated with increased fertility in women. It almost (not even close) makes up for the fact they get 100 percent more drinks while you're pregnant.

But alcohol isn't the only drink your partner should can in a can. According to fertility guide, Eat, Love, and Get Pregnant, soda can hinder sperm development, lowering the count. This is likely due to the caffeine in the beverage, but the authors suggested that it might also be the high fructose corn syrup.

Your SO should also steer clear of soy. Men who consumed large amounts of soy products saw a decreased level of testosterone production compared to men who do not eat soy, according to the Journal of Human Reproduction. The study posited that the xenoestrogens in the soy are responsible for the decreased testosterone.

If your partner consumes a lot of trans fats, they may want to cut back there, too. Trans fats are detrimental to sperm concentration in semen, according to Fertility and Sterility. Trans fats are the fats that are solid at room temperature, so they're found in butters, meats, and cheeses, as well as processed food.

And finally, your partner should avoid anything served in Bisphenol-A (BPA), the plastic ingredient that makes a bottle or plate rigid. It's less common than it was 10 years ago, but can still be found in some bottles and disposable dishes. It can damage and mutate your partner's sperm, leading to unforeseen consequences, according to Reproductive Toxicology. It's just not worth it, making it the number one thing you should tell your partner to avoid when trying to conceive.

Yes, the list of foods for your partner to cut back on while trying to get pregnant is shorter than the list for you, but it's just as important. Honestly, it's also a lot of fun to say, "Now honey, should you have that third beer?" Especially when you know they're going to have so much more beer in a few months while you sip your lemon water resting on your giant, awesome belly. Be sure to talk to your OB-GYN about other ways you, and your partner, can prepare for pregnancy.