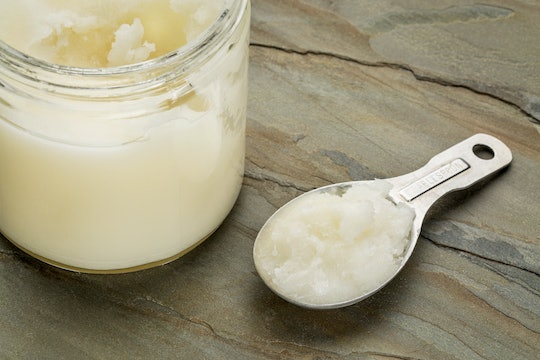 Coconut oil is one of those products you can have in virtually every room of your house for a ton of different uses. Cook with it, moisturize with it, use it in a homemade exfoliant — but what about sneaking it into the bedroom? Many have tried coconut oil out as a lubricant, but if you're trying to conceive, you may be wondering if it has another magical power — can coconut oil help me get pregnant?

Lubricant and conception are pretty big topics when you're trying to conceive. No matter how long you've been at it, everyone wants to have the best shot possible at becoming pregnant each month. And lubricant? It's not always conducive to pregnancy. The American Pregnancy Association recommended that if you're trying to get pregnant, you should avoid lubricants that contain spermicide, which means you need to read some labels. According to Women's Health, many popular brands of lubricant include some spermicidal ingredients.

So where does that leave you? If you need lubrication to get it on, there are more natural options. But while coconut oil has been considered a great alternative to other lubricants, it's not the best option for trying to get pregnant either, according to Dr. Joanna Ellington, sexual health and fertility expert at Fairhaven Health. "Coconut oil has been shown to decrease sperm motility in animal models," she tells Romper. "It contains a strong antimicrobial activity and this same chemical may impact sperm." Ellington also notes that oils aren't exactly best for your vagina either and have been associated with an increase in vaginal infection rates.