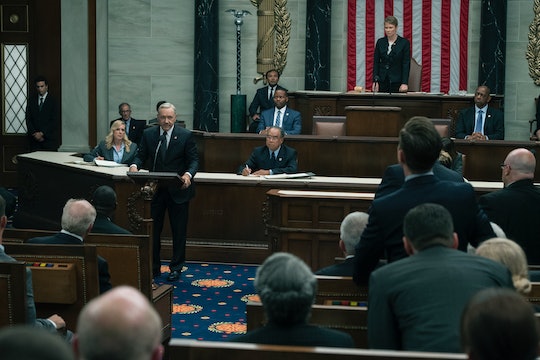 The 'House Of Cards' Election Is Giving Fans Deja Vu

Warning; spoilers ahead for House of Cards Season 5, Episode 4! I'll admit it; I'm starting to feel almost sorry for Governor Will Conway. The Republican presidential candidate chose to run against not only President Frank Underwood, but his formidable wife and running mate, Claire. A mistake of near monumental proportions, as far as we can tell from the fourth episode of Season 5 on House of Cards. Just as poor Conway thinks he has the presidency in the bag... nope. Things go awry, and suddenly Congress may have to decide the election on House of Cards.

So here's the situation: there was an apparent terrorist attack at a voting station in Tennessee, and further terrorist threats from ICO (the Islamic Caliphate Organization) against at least three more voting stations. Oddly enough, the issues seem to keep happening in Republican stronghold districts. Two of the governors, under pressure from Doug Stamper (the most loyal pal a sinister president can have, if you ask me) to shut down voting. This causes chaos, something the Underwoods promised us way back at the end of Season 4 when they'd had enough of the regular folk questioning them, and eventually two states refuse to certify the next president.

This is actually a true thing. If either one of the candidates does not receive enough votes in the Electoral College, which would mean getting at least 270 out of the possible 538 votes, then the presidency is decided by Congress. The 12th Amendment requires that, in the unlikely event that a president has not been chosen by Electoral College votes, Congress then has to immediately call a session to choose the next president. As Frank Underwood eloquently explained to us at the beginning of Season 5, Episode 5, the Senate will then choose the vice president.

The identity of the next President of these United States is once again in the hands of a bunch of self-serving, money-hungry, boot-licking, power-seeking politicians who can be seduced, or sucker-punched, or blackmailed into submission. And all I need is one more vote than the other guy.

So it looks like Claire and Frank have left their fate in the capable hands of Congress and the Senate. Just kidding, of course. I can't imagine what they have in store for them, and I don't know if the White House will still be under the Underwood domain. But I tell you... it's giving me flashbacks to the 2016 presidential election and the shocking results that ensued.