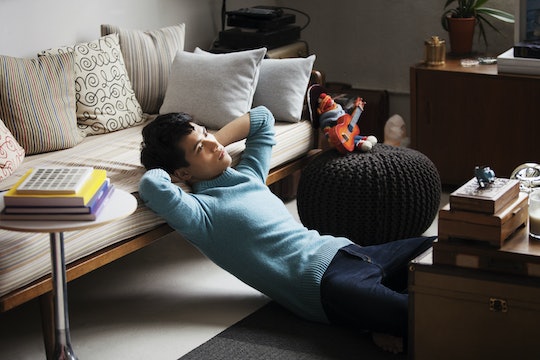 Can Dads And Non-Birth Parents Get Postpartum Depression?

Although no one wants to experience it, the majority of new moms have been prepped by their doctors, friends, parenting websites, and books about the possibility of going through postpartum depression, or PPD. Most often attributed to hormonal changes during pregnancy, it's understandable why moms-to-be would be warned about this illness. But recently, parents have been asking, can dads and other non-birth parents can get postpartum depression?

According to the Centers For Disease Control and Prevention (CDC) one in nine women experience depression before, during, or after pregnancy, and this statistic only includes the moms who seek a clinical diagnosis. The number could be much greater. In fact, the Illinois Department of Public Health has estimated that up to 20 percent of new moms will experience PPD.

The drop in estrogen and progesterone in your body may contribute to postpartum depression, but hormones aren't the only cause of PPD. The Mayo Clinic reported that sleep deprivation, anxiety, feelings of being overwhelmed, struggles with your new identity as a parent, and the feeling that you have lost control of your life contribute greatly to PPD. Does this mean that dads, adoptive parents, and non-biological parents can also experience PPD?

According to Postpartum Progress, Craig Mullins, a professional counselor in Colorado Springs who specializes in counseling for men and treating paternal postpartum depression, men and other non-birth parents can absolutely have PPD. Mullins suggested that a new generation of dads who are actively taking part in the day-to-day care taking of their infants can feel confused, exhausted, helpless, alone and trapped – symptoms almost identical to PPD. He added that culturally, men are not encouraged to express their emotions which can, in turn, manifest as cynicism, impulsiveness, indecisiveness, working constantly, and loss of interest in sex.

Women in same-sex relationships can experience PPD even if their partner was the parent who went through pregnancy and childbirth. Postpartum Progress shared the story of a woman who was diagnosed with PPD after her wife delivered their child. She was grateful that she had a doctor who acknowledged that non-birth parents can have PPD, and helped her seek appropriate treatment. The Atlantic reported that non-birth parents in a same-sex relationship can feel invisible as mothers. The traditional accolades bestowed upon expecting mothers (baby showers, etc.) may not be given to the co-parent, who happens to also be a mom, causing her to feel excluded and can contribute to depressive symptoms.

Adoptive parents struggle with this, as well. Adoption is a rigorous process, and many times children come into their new homes with challenging behaviors. According to The Atlantic, these behaviors, combined with the adoptive parents' expectations (of themselves, their child, or of family and friends) can cause postpartum depression.

Thankfully, PPD is treatable whether you are a birth mother, dad, co-parent, or adoptive parent. Mullins noted that many respond well to individual counseling with a trusted professional. Antidepressants and anti-anxiety medications are also a treatment option. If you are experiencing signs of a mood disorder, talk to your doctor right away so that you can prevent some of the long term effects of PPD.