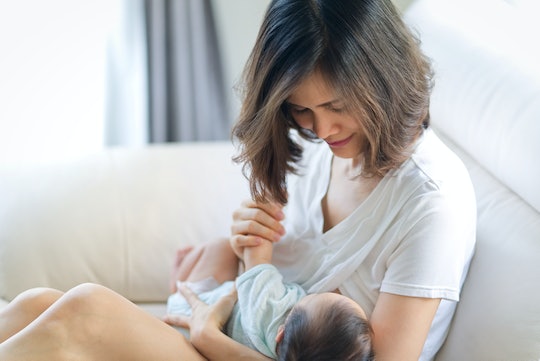 Here's How Depression Can Affect Breastfeeding, According To An Expert

As any new mom knows, there are myriad factors that can affect how well breastfeeding will go. Mastitis, low milk supply, a demanding work schedule — all of these things can have a serious impact on nursing. But what about a woman's mental health? Can depression affect breastfeeding?

So regular depression actually increases a new mom's chances of developing PPD. PPD can then in turn lead to moms wanting to cut nursing short, or to not wanting to nurse period.

Interestingly, on the flip-side, DiTomasso says breastfeeding can actually have a positive effect on depression symptoms. "There is some evidence that breastfeeding protects against postpartum depression, or can assist in a swifter recovery from symptoms," says DiTomasso. Which sounds a bit like a snake eating-its-tail kind of situation: nursing could make a new mom feel better, but if she's already suffering from PPD, she likely isn't going to feel like doing the thing that might improve her symptoms.

For some new moms, there is the added factor of medication to consider. If you're someone who has long taken medication for her depression, you may find yourself weighing whether or not to take antidepressants while you nurse. While many doctors believe the benefits of taking helpful medications far outweigh the risks, there unfortunately haven't been many long-term studies on the subject, as the New York Times recently reported.

One thing is clear: the relationship between depression and breastfeeding can be complicated. But no matter the situation, any new mom who feels she might be struggling with depression should be sure to seek out the necessary help. Depression symptoms can range from loss of appetite, to excessive crying, to extreme mood swings, to just general feelings of hopelessness.

"Women should be encouraged to seek treatment for depressive symptoms and/or problems with breastfeeding," says DiTomasso. "Postpartum depression is often treated with psychotherapy (also called talk therapy or mental health counseling), medication or both. If desired, lactation support can also be provided to help support breastfeeding."