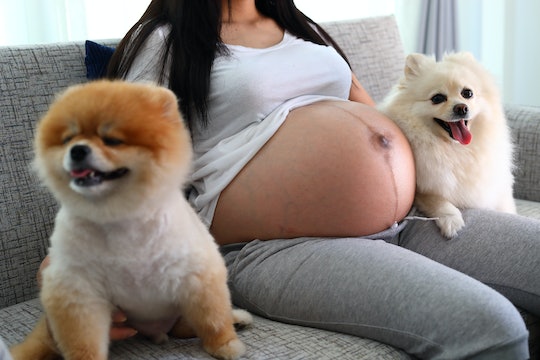 It seemed like from the moment I got pregnant, my dogs were all about my belly. My Akita, Brownie, would rest her head on my tummy while her paws were across my knees as I laid on the living room floor. My Rottweiler was equally as obsessed, nosing my belly and wagging his stubby tail as he jammed his freezing cold nose into my belly button. I swear, they knew what was up. But can dogs hear my unborn baby? Do they have some seriously freaky animal senses going on?

As it turns out, this is a pretty hot topic in the animal behavior community. There are a lot of different opinions out there on just how much a dog can hear and sense of babies in the womb. According to Jennie K. Willis, an applied animal behaviorist with Colorado State University's College of Veterinary Medicine, it's possible they sense something going on. She told Animal Planet, "Although it hasn't been scientifically explored, it's within the realm of reason." According to The Veterinary Journal, dogs can hear about four times as well as your average human, so it stands to reason if your partner can hear your baby sloshing about with their ear pressed to your tummy, your dog most certainly can as well.

I spoke with veterinary technician and mom from Akron, Ohio, Heather Baldwin, to find out about how much your dogs can actually hear. She tells Romper that this comes up a lot. "We not only wonder if dogs can hear unborn babies, but puppies as well. We notice a lot of protective instincts coming to the fore, even from other female dogs of the same family or 'pack.'" She notes that their hearing is spectacular, "which is why dog whistles work so well, and why you can't open a square of American cheese without them running to you, even if you're on opposite sides of the house." (I'm comforted to know that my dogs aren't the only weirdos who enjoy the orange substance.)

"But they're no ultrasound from the dog bed," she adds. They aren't going to hear everything from afar. Baldwin notes that your dog would have to be on top of you to hear what's going on inside your uterus. "Dogs are predators at heart, [but] because they don't view you as prey, they view you as pack. While they're going to be in tune with your body, the smells, the sounds, and your behavior, they aren't going to log every difference." However, she says that once they notice a change, they're going to be all about your belly if that's the kind of relationship you have.

My dogs smashed their heads to my belly throughout my pregnancy, but I don't know if they actually heard anything or were straining to listen. To be honest, my Akita might not have been able to hear anything from her favorite spot in front of the air conditioner, but I think maybe she had to have heard something pressed against me since she was constantly doing it during my pregnancy. And while we did go through the typical process of getting our dogs ready to meet the new babies, I could've sworn they already knew my babies when we first brought them home, even just by the scent of their blanket. My husband said when he introduced the baby's smell to the dogs, they both started wagging their butts with glee as if they had been expecting them all along. Whether or not your dog can hear your unborn baby is up for debate, but it does seem like they know they're going to get a friend pretty early.