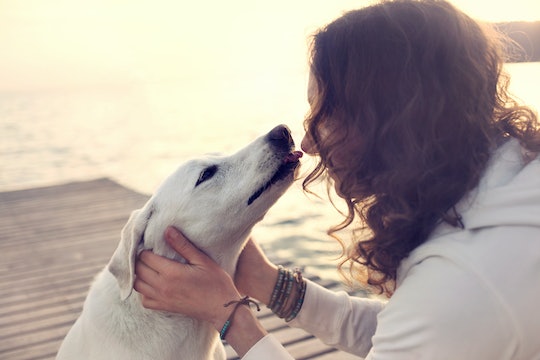 Ugh, another rough day at work ends with snuggling your pup on the couch and a good cry. When Rover cozies up and gives lots of kisses, you may wonder, can dogs tell when you’re sad? According to pet industry experts, they can sense sadness and other emotions, and react by trying to offer comfort. Yes, they truly are the beings we don't deserve.

More Like This
In Defense Of The Practical Gift For Mother’s Day
If A Tick's Head Gets Stuck When You're Pulling It Out, Here's What To Do
These Pregnancy Symptoms Can Be Easy To Miss When You're Still Nursing
Can You Go Down A Water Slide If You're Pregnant?

Robert Cabral, top dog trainer and Wag! advisory board member, tells Romper in an interview that what clues pets in to your emotions is your body language. “Dogs communicate primarily through body language. Vocal communication is minimally used, so dogs rely on what they feel and see. The way we move and our energy level greatly influences the way our dogs see and perceive us,” he explains.

Makes sense, right? Dogs know their humans best, so when their mannerisms change due to anger, sadness, or stress, their furry friends notice. The reaction to sadness may differ between different dogs, however.

“The reaction will differ from dog to dog and situation to situation,” says Cabral. “This is why some dogs make great service dogs and others make terrible ones. Some dogs may respond by jumping on your head and trying to cheer you up, others may just lay next to you and console you. For the most part, I would say that many more dogs would take the path of consoling rather than playing the clown.”

But will dogs react to anyone’s sadness, or just their owner’s? LiveScience.com reported on a 2012 study by the University of London in which 18 dogs participated. Of those 18 dogs, 15 approached their owner or a researcher during crying fits, while only six approached when the person began humming. These findings suggest that it's emotional content, not curiosity or general sounds, and that their comfort isn’t limited just to their own human.

“Since our dogs bond with us, it is likely that they will react more strongly to our sadness, or other emotions, than anyone else's. However, if your dog spends a certain amount of time with someone, they may start to show similar behaviors toward them,” Cabral explains.

Dogs’ ability to sense emotions is not limited to sadness thanks to their keen sense of smell, either. “Dogs can smell when a person's blood sugar shifts, so a shift in emotion is a no-brainer for them,” says Cabral.

WagWalking.com noted that dogs’ super smellers even allow them to sense mood changes related to depression. Their experts say dogs can smell the rise and fall of different brain chemicals and physical changes, like increased sweating. Your pet may then bring you a toy to try and start a game, or approach with their tail lowered and try to cuddle.

Dogs aren’t just able to sense human emotions, but they have plenty of their own as well, which may be why they try to provide comfort when they sense them. “For a long time, people believed that dogs were not capable of emotions, but that has become an archaic belief. We now know that dogs will show many emotions that we experience including sadness, happiness, grief, frustration, and more.”

Canines are used as service animals more often than any other animal because of all these ways that dogs are able to tune into human emotions. However, Cabral emphasizes that while all dogs may be able to sense an upset owner, not all dogs are right for therapy or other services. “100 percent — a dog that is trained for the skill of therapy and service is usually also a dog that has been bred for certain characteristics,” he says. “What's important to note is that if a dog is used for a ‘service,’ the dog should be a suitable candidate. This will only be known through proper training and breeding. These dogs are expected to work in public places and it's important that these dogs don't interfere or cause a hindrance to other service dogs and people in public.”