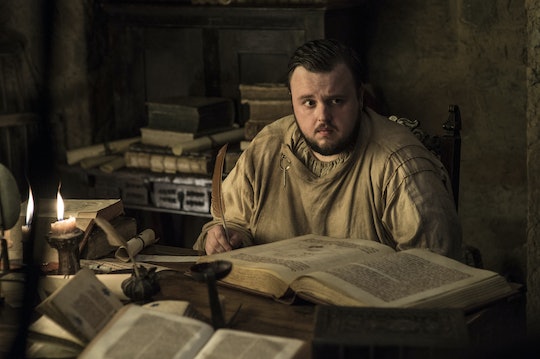 Game of Thrones returned to HBO last week and it was just as epic as fans wanted it to be. Not only did viewers get to see what is possibly the best cold open ever — where Arya killed the last remaining members of House Frey — but they also got a glimpse of the the Citadel, where Ser Jorah Mormont is currently taking up residence in the hopes of finding a cure for his greyscale. Judging by the looks of his scaly arm, though, that search isn't going too well. However, the premiere might have given us a clue of how he'll eventually be healed. So can dragonglass cure Jorah on Game of Thrones? It's a possibility the show is setting up.

After Jorah delivered Tyrion to Dany — a valuable prisoner-turned-Hand of the Queen — he was hoping she'd allow him back into the fold, but realized he couldn't go near anyone for risk of infecting them. Instead, Dany demanded that he find a cure for himself, and made it an order. Not one to disobey his queen, Jorah wound up at the Citadel, presumably because he figured the maesters would be the ones best equipped to help him.

Fans saw his arm, scaly like a dragon's claw, reach out of a quarantine cell in the sick bay of the Citadel toward Samwell Tarley, who had come to collect his empty food dish. Jorah asked if Daenerys has arrived yet, and Sam said no. This interaction set up a potential relationship between the two and, given that Sam is on a personal quest to defeat the White Walkers, he may have stumbled across some information that could help Jorah.

One eagle-eyed Redditor snapped a screenshot of the ancient text from the restricted section of the library which Sam swiped and has been studying late at night. We can't see the page in full, but there are references to ingesting dragonglass and utilizing dragonglass as a possible cure for something. We already know that the Children of the Forest shoved a piece of dragonglass into Benjen's heart to halt the process of him becoming a wight. It's also the only known weapon that can kill White Walkers. Is it possible that ingesting it can cure greyscale as well?

Interestingly, the only known survivor of greyscale was Princess Shireen Baratheon, who contracted the disease as a child. In her case, it was caught early on and her parents had the wealth and resources to find a cure. Is it a coincidence that she also happened to be living in Dragonstone, the ancestral Targaryen castle, which happens to be sitting on a dragonglass mine? These threads all seem connected, but we'll have to see if Sam can piece together the puzzle — though he may be too preoccupied with saving the world from the White Walkers.