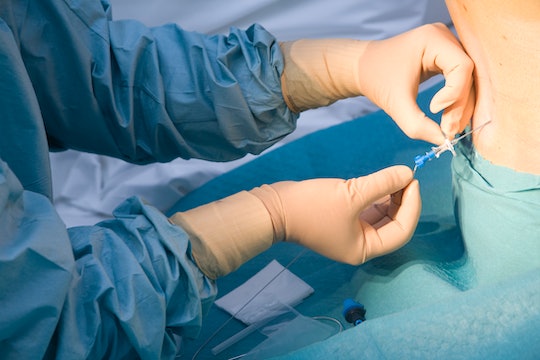 Can Epidurals Cause Lingering Back Pain Postpartum? Experts Explain

The epidural I had during labor with my first born provided immense pain relief and proved extremely helpful when I ended up with an emergency C-section, but I had plenty of questions during recovery. When would the numbness wear off? Can epidurals cause lingering back pain postpartum? Will there be long-lasting side effects from my epidural?

More than 3 million laboring moms received epidurals in 2016, according to the Center for Disease Control's National Vital Statistics Report. Epidurals are widely used as pain relief during childbirth, and misconceptions about their effectiveness and side effects are also wide-spread.

"Epidurals can cause short term back pain because the needle can bruise tissues. A tissue bruise from an epidural is like any other bruise one gets. It's sore for a few days but then resolves," McCallum R. Hoyt M.D. tells Romper. "The needle can also bruise the periosteum which is the covering around bone. Should that happen, the bruise can last for a couple of months, but it too will resolve."

Dr. Hoyt notes that any back pain caused by bruising from the epidural needle should resolve within two to three months, so any back pain lingering after that point should be examined for alternative causes. Issues such as lumbar and pelvic destabilization due to prolonged stretching and elevated relaxin levels during pregnancy, unresolved weight gain post-pregnancy, or the basic stress of caring for a newborn and a woman moving her body in unfamiliar ways post-birth may all attribute to lingering postpartum back pain.

"Research on whether or not epidurals caused chronic back pain was done many years ago, primarily in the U.K.," Dr. Hoyt says. "After 10 years of research looking at many factors, the evidence demonstrated that epidurals do not cause chronic back pain. However, the bruising can be a distinct possibility."

Multiple studies have concluded that postpartum back pain occurrences can happen regardless of whether or not a woman receives an epidural. One British study of 817 postpartum women back in 1992 found that 67% of women reported back pain immediately after delivery and 37% reported experiencing back pain at a follow up appointment, prompting researchers to delve into the reasons for postpartum back pain, including epidural usage. A 2002 randomized, controlled study of women who received epidurals concluded: "After childbirth there are no differences in the incidence of long term low back pain, disability, or movement restriction between women who receive epidural pain relief and women who receive other forms of pain relief."

So, while there may not be more instances of long term back pain due to epidural use than for postpartum women who do not receive epidurals, back pain following an epidural might still happen. This can be caused in the short term by bruising, or in the long term by the positioning of a laboring mom during birth and potential injuries that go unnoticed when laboring with an epidural.

"Epidurals can cause back pain or worse can cause permanent nerve damage from the injection. But, not all the back pain can come from the epidural itself," Dr. Brenda Fairchild, a board certified chiropractor who specializes in pregnancy and pediatrics tells Romper. "Depending on the provider, if moms-to-be are given an epidural, they labor and birth on their backs with legs in stirrups, called lithotomy position. You can also be on your side, sitting, or in a squat position. Because of the epidural, women can feel less pain so they may not know their back muscles are going into spasms and need to change positions. Depending on severity of the injury, the pain can range anywhere from a few days if it's muscle spasm, to six to eight weeks if there is pelvic instability or fractured tailbone from delivery."

Doctors recommend bringing any back pain that lingers post-birth to your primary care provider's attention. An examination of potential causes for lingering back pain may reveal that the pain is unrelated to an epidural, but getting checked out and speaking with your doctor may give you some relief once you determine the underlying cause.

"It is not uncommon to have some back pain right after delivery of your baby. But it is better to be safe and let your provider know what is going on," Dr. Fairchild recommends. "Some moms have a hard time standing, sitting, numbness in legs or arms, can’t get comfortable sleeping, or severe headaches. If you should experience any symptoms that you believe are not normal, let you provider know as soon as possible."

Dr. Brenda Fairchild, DC, CACCP, Pea and the Pod Chiropractic, author of Why Didn’t My Pediatrician Tell me That? and The Crunchy Mom’s Hands on Guide to Pregnancy

More Like This
27 Sweet & Strong Boy Names That Start With “S”
25 Baby Girl Names That Begin With D
Are You Leaking Amniotic Fluid Or Is It Normal Discharge? Experts Explain
New Report Shows 80% Of Pregnancy-Related Deaths Are Preventable