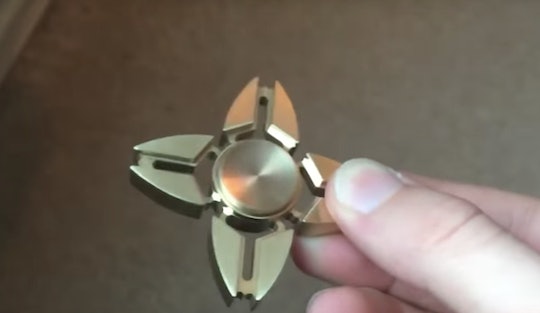 I'll admit, I'm a total klutz. When I was 15, I fell down the stairs and broke my right hand, my left wrist, my jaw, and blacked both eyes. I fell down six stairs. Six. So, new things scare me. Like fidget spinners. Can fidget spinners hurt people? Or, better yet, how do I avoid hurting myself playing with a fidget spinner?

Fidget spinners are handheld toys resembling a ceiling fan that spin on a ball bearing, with a weight at each terminating end, and they are all the rage. Used as both therapy and entertainment, these toys have taken over the elementary-aged population. Kids are modifying them, decorating them, and even learning to do tricks with the popular toys.

As with everything in life, there is risk. These toys are essentially untethered, spinning weights — there are bound to be accidents. All one needs to do is search YouTube for "fidget spinner injuries" to see the pain wrought upon those who weren't careful. Actually, on second thought, don't do that. Some of the videos could make you very queasy. I actually had to lie flat for a moment after watching a particularly gruesome video. I can somewhat handle watching adults get injured. But kids? I need to breathe into a paper bag and elevate my feet.

Some of the fidget spinners on the market have sharp edges and are made with unforgiving materials, making the risk of injury that much more frightening. The spinners sold at drug stores and bodegas are rounded plastic or rubber, making them at least have the appearance and feel of being less dangerous.

Can fidget spinners hurt people? Apparently in many and untold ways. A boy in Sydney nearly lost an eye, according to CNN. I, myself, may have been spinning it too close to my face to watch the bearing, and it's possible I clipped my cheekbone. It's also possible it bruised. It's also possible that I am just not gifted with the moving, the walking, and the coordination.

Most of the injuries I found on YouTube were related to people trying to do tricks. Tricks with any toy or sport tend to lead to injuries, because you're attempting to do something outside of the normal, prescribed purview of the toy. Or, perhaps you just wanted to see what the ball bearing looked like as it rotated, and you just weren't paying enough attention to how close you held it to your face.

That doesn't mean they don't also have some benefits for those people who use it in the safest possible manner, but it's easy to negate the benefits of the toy in the name of adventure. As with anything, be careful and watchful with your child and yourself with the fidget spinners. Just try not to literally watch too closely — you might get injured.