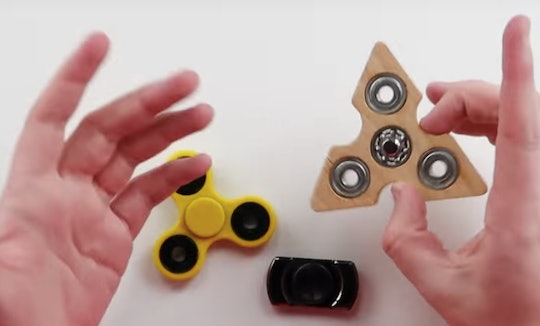 What Do Fidget Spinners Actually Do?

No matter how old I get, I'm always amazed when a toy catches on like wild fire. (And I lived through Cabbage Patch Kids, Tickle Me Elmo, and grown people fighting for Hatchimals this past Christmas.) But I'm especially amazed when it turns out to be such a simple toy, without any bells or whistles. If your kid isn't playing for a fidget spinner yet, it's only a matter of time. But what do fidget spinners do? Turns out, they're more than just a hunk of plastic for kids to irritate you with at the dinner table.

The concept behind fidget spinners is simple enough. According to TIME, fidget spinners are the size of a coaster with a bearing in the middle of it that spins, making the two or three prongs attached to the spinner blur as they go. Depending on the one you buy, it can be made of either plastic or metal. People use them to spin in their hands, watching the prongs blur, or set them on hard surfaces to spin.

I know — what's the big deal? Apart from it being incredibly entrancing to watch the prongs blur, YouTube is full of videos (around 685,000 show up when you do a search) of kids and adults doing tricks with fidget spinners, comparing different brands, and practicing their favorite twirl moves. It's basically the new bottle-flipping.

The difference? Fidget spinners can be beneficial for those who have issues focusing, whether it's from anxiety or Attention-Deficit/Hyperactivity Disorder (ADHD). A 2016 study published in Child Neuropsychology found that children who were diagnosed with ADHD could concentrate better when they were actively fidgeting than when they weren't. And fidget spinners? They give children the opportunity to fidget in a much quieter, smaller way, which makes them perfect for a classroom setting. (Depending on the school. Many have banned fidget spinners as they find that they are more distracting than beneficial.)

Because they aren't touted as an exclusive sensory tool, kids everywhere are jumping on the craze, collecting fidget spinners, trying out new brands, and creating tricks with their friends. Honestly, the toy sounds simple (and it might be a little frustrating at the dinner table), but it's a much cheaper and easier-to-find toy than previous obsessions. On Amazon, there are almost 34,000 results for "fidget spinner" and the prices can vary anywhere from less than $2 to almost $500. Meaning, there's something for everyone, even if the person who wants it doesn't have ADHD or another condition where fidgeting helps.

You Can Shop Fidget Spinners At Amazon.com

Fidget spinners do a lot of things (including annoying teachers), but it seems the benefits are worth it. Plus, if a handheld toy made of plastic can keep your kid happy and occupied for hours, why not buy one in every color?