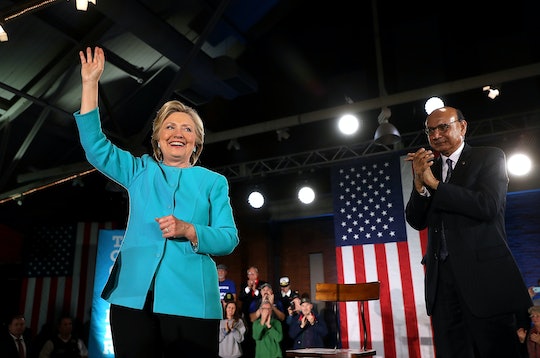 Can Hillary Clinton Win Without Florida? Yes, But Her Opponent May Struggle

There are several battleground states too close to call in this election, but Florida has been a hot topic for those who voted for Democratic presidential candidate Hillary Clinton. But can Hillary Clinton win without Florida or are those 29 electoral votes necessary for a victory?

Though polls in Florida closed at 8:00 pm. ET, the race is still too close to call. According to NPR, Florida is a toss-up for both candidates, but if Republican presidential candidate Donald Trump loses Florida, he's out of the race. NPR noted that there is no way Trump can win the election without taking Florida. But Clinton doesn't necessarily need the Sunshine State to win. With the 82 electoral votes that Clinton is predicted to pick up, NPR noted that she will hit 270 electoral votes before she even finishes grabbing all of the "pick up" states that aren't solid democratic states.

So why is Florida such a battleground state? With it's whopping 29 electoral votes, it's a big win for anybody, but CNN noted that its large Hispanic population is what's keeping everyone on their toes as well as its history of being a tight race. According to a separate CNN article, President Obama won the 29 electoral votes by just over 0.9 percent back in 2012. It's not a state that comes to presidential candidates lightly.

Either way, Florida is bound to keep the country on its toes. With its Hispanic population, however, Clinton voters are hopeful. The Washington Post noted that in early voting, Hispanic voters surged by 4.4 percentage points, an increase from four years ago when Obama and Romney fought so hard for the Sunshine State. Nobody's willing to predict who will win Florida just yet, but even if Clinton loses the state, she still has a chance to become the next POTUS.