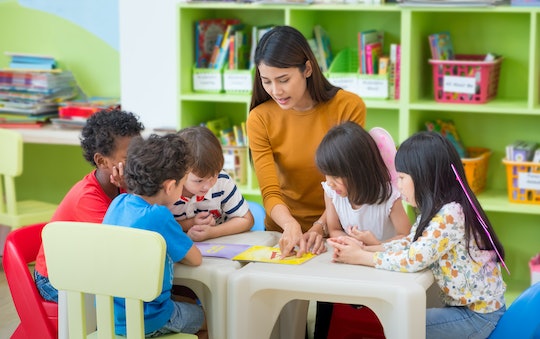 Before leaving town last Friday, President Donald Trump signed into law the GOP's divisive tax reform bill that's been labeled by critics as a gift to the wealthy. The Republican-backed plan — considered one of the most significant overhauls to the U.S. tax code — includes massive tax cuts for corporations, alongside other important updates that could affect most American households. As a parent, you're probably wondering what these changes mean for you and your family. For example, you may ask yourself: "Can I claim preschool costs under the new tax bill?" Turns out, that's one aspect of the code that hasn't changed.

Since the start of his presidency, Trump promised to include a provision in his tax plan that would help ease the burden of child care costs, at the urging of daughter Ivanka. Under the final bill, that promise turned into a boost to the Child and Dependent Care Credit, a section of the U.S. tax code that hasn't been updated since 2003. But the changes didn't affect which types of care are eligible under the tax credit. You can still claim costs spent on preschool, nursery school, day care, summer camp, or similar programs, according to the U.S. Internal Revenue Service.

But those are the only types of care expenses that are eligible under the Child and Dependent Care Credit. Parents can't claim costs for overnight summer camps, kindergarten, and first grade or higher, according to TurboTax. However, if you do pay for child care before or after kindergarten or a higher grade, those expenses may qualify.

Credits for child care expenses have long been considered a tax break for working families, helping them shoulder the increasing costs of day care and other programs in the United States. Matt Becker, a financial planner and founder of Mom and Dad Money, told TurboTax,

Child care is expensive, and the cost gives many parents pause about whether it's worth returning to the workforce. But the child and dependent care credit can make it a little easier for parents to keep working without putting too much stress on their budget.

But that's not necessarily true — at least, not across the board for all families in the United States. Under Trump's tax code overhaul, parents are now allowed to claim $2,000 per child. Although on paper, that seems beneficial, only $1,400 at most will be refundable against payroll taxes, according to NBC News.

And the problem is, only parents earning a high income will be eligible to receive the full $1,400 because, as NBC News reported, the credit scales up based on income. Although the eligibility for low-income parents was expanded under the current version of the tax law, most working families earning a low salary would receive less than $100, comparatively, Chye-Ching Huang, director of federal tax policy at the Center on Budget and Policy, told NBC News.

Haung continued, according to NBC News,

Ten million children in low-income working families will get nothing from the last-minute changes to the GOP tax bill's child tax credit increase — and as a result will get just a token increase of $75 or less per family. Another 14 million will continue to get less than the bill's full CTC increase.

Although care eligibility hasn't changed under the Trump administration's tax reform law, the updated version of the Child and Dependent Care Credit still falls short of helping families who need it the most. Child care costs continue to rise to astronomical levels and Trump's new plan does nothing substantial to offset that burden for working parents earning low incomes. If the GOP wanted to help low-income parents and families, then Trump wouldn't have signed a law that benefits his friends.