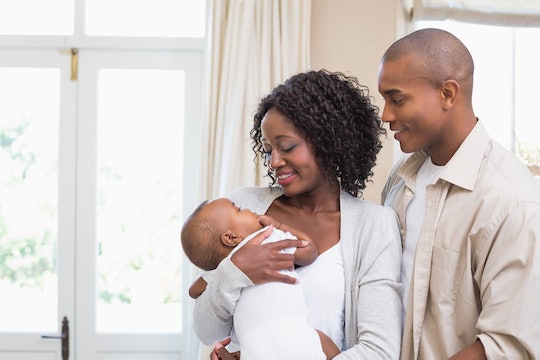 Here's How The New Tax Plan Will Affect Parents

Well, it's done: On Friday, before leaving town, President Donald Trump signed into law the Republican-backed tax code overhaul that has been assailed as a windfall for the wealthy. That, of course, is not an inaccurate criticism when you dig into the specifics: The GOP's tax reform contains massive cuts that favor corporations rather than the middle class Trump purports to support. There are clear winners and losers, but how will the new tax plan affect parents exactly? The overhaul would do more harm than good for most families in the United States.

Single and unmarried parents stand to lose the most under the newly-signed tax reform law, which is projected to add $1 trillion or more to federal budget deficits, according to CNBC. That's because, as Forbes reported, the updated tax brackets could have a single-parent household earning an annual $100,000 salary paying close to $4,000 more in taxes than a married couple or family bring home the same income. As for parenting couples who've chosen not to marry, they could end up shelling out over $3,500 more in yearly taxes, according to Forbes.

In other words: The tax code overhaul championed by Trump and Republican lawmakers will penalize parents for their familial status if it doesn't fall in line with the patriarchal notion of marriage.

That's not the only way the new tax plan will harm parents. The legislation also includes the child tax credit provision pushed by Ivanka Trump early in her father's presidency. The legislation's child tax credit increase will allow parents to claim $2,000 per child, but only $1,400 at most will be refundable against payroll taxes, according to NBC News.

The problem is, only parents earning a high salary will be eligible to receive the full $1,400 because the credit scales up based on income, NBC News reported. Although the eligibility for low-income parents was expanded under the current version of the law, most low-income working families would receive a paltry $75 or less, comparatively, Chye-Ching Huang, director of federal tax policy at the Center on Budget and Policy, told NBC News.

The GOP tax proposal is an insult to women across America. It would enrich the wealthiest few at the expense of women and working families, many of whom would see no benefit or their taxes actually go up. These plans would devastate programs critical to women's lives and livelihoods.

Only a small subset of parents would stand to benefit from the Republicans' ill-conceived tax reform: Those who head high-income households.

In addition to the child tax credit, wealthy parents — in particular, those heading households with incomes of $1 million or more — would receive an average tax cut of $69,660, according to NPR. Although the average household would get a $1,610 tax cut next year, households earning $50,000 to $75,000, on the other hand, would only receive a tax cut of $870, NPR reported.

Also, under the new plan, parents can now use money from the tax-free 529 college savings account — up to $10,000 per year, per child — to pay tuition for private school and home-schooling, according to The Washington Post. This change is a boon for school choice, but with one caveat: School choice advocates say it will mostly benefit high-earning families who have the means to save for private K-12 schooling, The Washington Post reported.

Trump and the Republican Party may hail their new tax plan as a victory for the middle class. But a look at the specifics goes to show that the tax code overhaul only benefits the wealthy, whether they're corporations or families. The middle and lower class are out of luck.