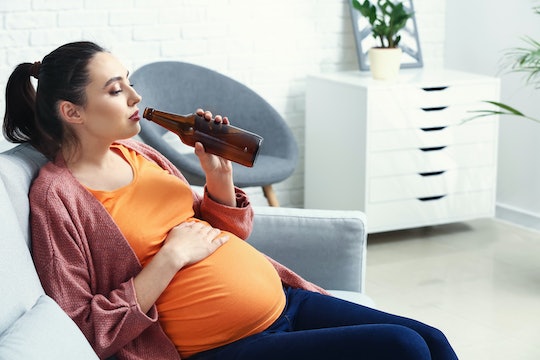 Here's What You Need To Know About Non-Alcoholic Beer & Pregnancy

There are more alleged rules about eating and drinking during pregnancy than a woman can even keep up with these days, but one that should be taken seriously is alcohol consumption. Beer aficionados may be wondering, "What about nonalcoholic beer? Can I drink non-alcoholic beer while pregnant?" Recommendations vary; while some professionals urge women to abstain completely, others allow a little more leeway, but the whole topic can feel a bit like playing with fire.

“Bottom line — there are currently no studies directly evaluating the safety of non-alcoholic beverages in pregnancy,” Dr. Michael Cackovic, maternal fetal medicine physician at The Ohio State University Wexner Medical Center tells Romper via email. ”There are data indicating that such beverages might contain higher-than-expected amounts of ethanol. The American College of ObGyn (ACOG) states that there is no safe amount of alcohol in pregnancy, and this remains the most basic interpretation of alcohol use in pregnancy. Up to a quarter of ‘non-alcoholic’ beverages have been shown to contain alcohol so it remains best to avoid them to eliminate any risk of fetal alcohol spectrum disorder.”

Brace yourself for an unsettling truth: non-alcoholic beer actually does contain some alcohol, Beer Advocate noted. Popular non-alcoholic beers such as O'Doul's are brewed in the same way as traditional beers — the alcohol is removed after fermentation and aging through distillation, without heating or cooking. So while the Alcohol By Volume (ABV) level of a serving of non-alcoholic beer is drastically lower than that of a regular beer (typically about 0.05% ABV), there are still trace amounts of alcohol that remain.

“Imbibing during pregnancy is not OK. While most do have a drink here and there without any negative consequences, there is no acceptable amount at which you can fall below and be in the clear,” Dr. Jaime M. Knopman, a board-certified reproductive endocrinologist at CCRM NY, and Dr. Sheeva Talebian, also a board-certified reproductive endocrinologist at CCRM NY, tell Romper in a joint email interview. “While most problems arise when large amounts are consumed on a frequent basis (medical term is fetal alcohol syndrome) and therefore a glass of wine occasionally is no harm, be careful with how much you drink. There is no recommended number of drinks or ounces that you can guzzle while with your girl or guy on board. So think of it as a good time to be the designated driver; we all need one.”

It comes as no surprise that medical opinions about the safety of a pregnant woman sipping non-alcoholic beer vary just as widely as those about her drinking traditionally prepared alcohol. Most practitioners who maintain a staunch "never" on moderate alcohol consumption during pregnancy will carry that advice over to include non-alcoholic beers as well, because at least that way they're nothing, if not consistent.

Dr. Stacia M. Crochet, an OB-GYN with Emory Healthcare, explains to Romper why practitioners’ stance on the issue may vary depending on who you speak to. “In other countries, the alcohol restrictions in pregnancy are not as severe (though, to be honest, I do not know exactly what the guidelines are),” Crochet says via email. “The attitude of obstetricians in other countries seems to be more lax with respect to alcohol in pregnancy. Since a complete ban on it during pregnancy seems so counterintuitive (and difficult given modern social society), many physicians have elected to take this same approach. That being said, ACOG and the CDC have doubled down on their stance stating that there is no safe amount of alcohol in pregnancy.”

Cackovic explains the variance another way and puts into perspective the risk versus reward aspect of choosing whether or not to ingest any alcohol — including non-alcoholic beer — during pregnancy. “I have never quite understood why some practitioners are so nonchalant with that recommendation. The disorder of fetal alcohol syndrome is a spectrum disorder: not all babies have the same findings. Given that and the science that everyone metabolizes alcohol differently, why would you take the chance with your baby?”

This is an issue that moms-to-be can discuss with their own individual care providers. Listening to your own practitioner and your own gut instincts is a crucial part of motherhood that starts during pregnancy. Ultimately it's your pregnancy. Once you've educated yourself, it's up to you to make the decision that’s right for you. You'll likely find cheerleaders and haters on both sides of the non-alcoholic beer-drinking fence.

This article was originally published on June 21, 2017