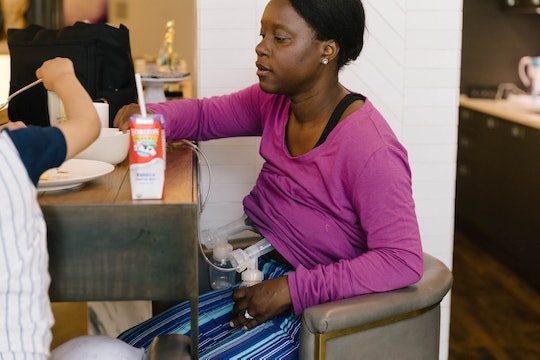 How Exclusively Pumping Affects Your Fertility

Breastfeeding absolutely acts as natural birth control, but as noted by Planned Parenthood, it's not perfect by any means. For one thing, you can only count on breastfeeding for contraception during the first six months of your baby's life, and once you start ovulating, all bets are off. Planned Parenthood reported that when done correctly, the lactational amenorrhea method (LAM) prevents pregnancy about as well as a hormonal contraceptive — however, the organization was careful to note that breastfeeding won't work as birth control if you introduce formula, solids — or a breast pump.

There are a variety of reasons why a mother might choose to exclusively pump in order to get breast milk to her baby. As VeryWell reported, a baby's medical condition might necessitate it, and a mother might need (or want) to be separated from her baby for an extended time. Some women simply choose exclusively pumping as the best breastfeeding method for them. If this is your situation, it's important to know that LAM is far less likely to prevent pregnancy. According to a study in Contraception, separation from your baby increases your fertility, and so does pumping.

The Centers for Disease Control and Prevention (CDC) noted that in order for LAM to prevent pregnancy, women must be fully or nearly fully breastfeeding (meaning you don't go any longer than four to six hours between feeds). If you were hoping to practice LAM while working a full-time job, that's a pretty big bummer.

But what's so different about pumping? Why does it render LAM so much less effective? A study in Pediatrics noted that the body responds differently to pumping than it does to infant suckling, possibly releasing differing levels of key hormones.

It's unfortunate that pumping — so crucial to the breastfeeding experiences of many women — isn't sufficient to prevent pregnancy. But really, even when practiced perfectly, LAM simply can't be counted on after six months, or if you supplement with formula or solid foods. Whether you're fully breastfeeding or exclusively pumping, it's probably a good idea to get back-up contraception in place sooner rather than later.