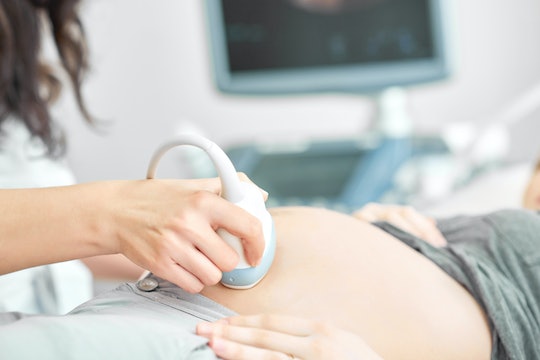 Everything You Need To Know About Ultrasounds With A Tilted Uterus

There are a lot of things to look forward to when you're pregnant — feeling the first kicks, finally spending an entire day without puking, and getting those sweet, fuzzy sonogram pictures and hearing that perfect heartbeat at your ultrasounds. But for a mom with a tilted uterus, those ultrasounds may not seem quite as thrilling. Wondering, "Can I get an ultrasound with a tilted uterus?" Well, you're in luck. No matter which direction your uterus is tilted in, you'll get to experience those amazing ultrasounds, too.

Dr. Marc Winter, OB-GYN at Saddleback Memorial Medical Center in Laguna Hills, California, tells Romper that a pregnancy with a tilted uterus is a lot like any other pregnancy. "It may be a little harder to hear the fetal heartbeat early in pregnancy," Winter says. "But sonograms can easily be done at anytime in the pregnancy."

OB-GYN G. Thomas Ruiz of Orange Coast Memorial Medical Center in Fountain Valley, California agrees with Winter. "Sonograms are not affected by uterine position," Ruiz says, noting that ultrasound technology is so great, that the position of your uterus doesn't matter in early detection of pregnancy either.

Not being able to get an ultrasound when you have a tilted uterus is a big misconception, despite the fact that the condition is so common. According to the U.S. National Library of Medicine, one in five women has a tilted uterus, and it has virtually no effect on a woman's pregnancy or labor and delivery.

In fact, the only issue associated with a tilted uterus is if the tilt is the result of another condition, such as endometriosis or adhesions. In those cases, treatment may be necessary.

But as far as experiencing the wonder and magic of a pregnancy ultrasound, your tilted uterus won't hold you back. Your doctor will be able to tell if you have a tilted uterus through a basic pelvic exam, according to the American Pregnancy Association, and it won't affect your ultrasounds, especially in later pregnancy. Around 10 to 12 weeks gestation, the American Pregnancy Association noted that your uterus will move into a straight position and will no longer be tipped in either direction, making ultrasounds even less of a worry. Basically? Don't let your tilted uterus stop you from doing your thing. (Or from getting a fridge full of those perfect ultrasound pictures.)