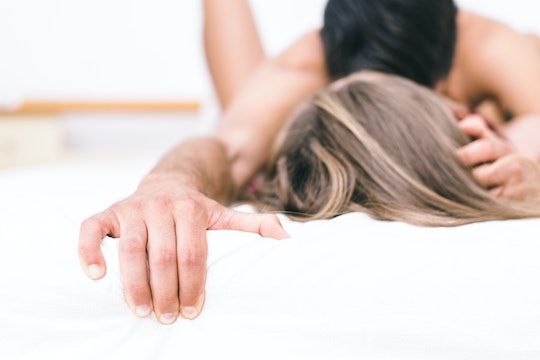 No, You Really Shouldn't Have Sex A Week After Giving Birth

Many women feel exhausted, emotional, and touched out right after giving birth. There’s little to no sleep happening around the house, and your hormones are completely out of whack. Sleep deprivation equals no sex drive, and that postpartum period is no joke either. Feeling like you don’t want to have sex right after having a baby is totally normal, but what about women who are ready to get it on immediately? For those asking, "can I have sex a week after giving birth?" it turns out there are some very legitimate medical and psychological reasons as to why you might not want to do the deed right away postpartum.

So when is it safe to have sex after having a baby? It really depends on the type of delivery you had, and how much birth affected your body.

According to OB-GYN Kameelah Phillips, however, even if you're interested in sex a week after delivery, you really shouldn’t be doing it or placing anything in your vagina following a vaginal delivery. "Pelvic rest — or the avoidance of intercourse, douching, or tampons — should be practiced until at least six weeks postpartum, because you risk disrupting a repair, increasing bleeding, or getting an infection,” Phillips says in an email to Romper.

And it’s especially important to wait after having a C-section, since it is major surgery after all. Phillips very adamantly says you definitely shouldn't have postpartum sex a week after a C-section, because it will increase the risk of the wound getting infected, having pain in the incision area, and increase bleeding. "Most women have a very low libido after a delivery — vaginal or C-section — so take this as a hint from Mother Nature and keep everything out," she says.

Dr. Kathryn Wright with Facey Medical Group Mission Hills says for a woman who had an uncomplicated vaginal delivery, with no lacerations, who wants to have sex, it’s perfectly safe. But, "I’ve never met a woman who wants to have sex right after giving birth," she says to Romper in an email. "In general, we recommend waiting to have [postpartum sex] six weeks after delivery, since we would like to examine the patient and clear her on an individual basis, however, when a woman is ready to have intercourse after giving birth, it's a very individual decision — both physically and emotionally."

What if you're feeling the opposite way about sex? Will you ever be ready to have sex again? Phillips says yes, but it’s extremely common to have libido changes after the first baby. "Postpartum physical and hormonal changes, sleep deprivation, anxiety, depression, and other factors can certainly affect the libido," she says. "Most of the time, these issues work themselves out — typically weeks or months — but for some women, libido issues may last longer."

Wright agrees, saying "Hormonally, she is not in a receptive mode … sleep deprivation of caring for a newborn generally eliminates sex drive, independent of all of the other factors. Many women don't have a return of sex drive for many months after giving birth — this is an evolutionary trait called ‘natural family spacing,’ and it is promoted by prolactin secretion caused by breastfeeding," she says. "Prolactin also decreases estrogen levels, resulting in lower vaginal lubrication, and often discomfort with intercourse."

Phillips says if you are struggling with low libido and don’t feel ready for intercourse yet, having alternatives (e.g., oral) that give you pleasure are generally welcome and great, however, if there are no libido challenges, many women go back to their normal practices postpartum.

If you’re not up for postpartum sex within weeks after having your baby, don’t stress over it. Remember, it’s your body’s way of telling you it needs more time to heal. If you are ready for sex a week after giving birth, talk to your doctor. Chances are, they'll want to keep you on a few more weeks of pelvic rest so they can completely clear you for your bedroom romps.