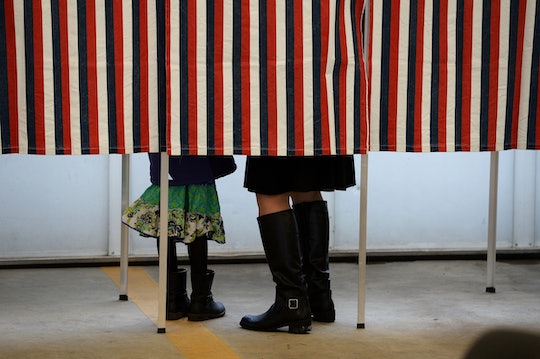 Can Independents Vote On Super Tuesday? It's More Complicated Than It Sounds

Super Tuesday is upon us and as the primary season starts to heat up, everyone should be checking on their voter registration status to see when they can head to the polls to decide who they want to see run for president. But primaries are tricky — it's the one time, in most states, that it actually does matter what party you're registered with for you to be eligible to vote. In order to avoid any problems at the polling station when going to cast your ballot, it's probably best that you ask the figure out the answer to the following question: Can Independents vote on Super Tuesday?

The answer to this is sort of tricky: It totally depends on where you live and whether there are Independent candidates running in the election — which there aren't this time around.

Super Tuesday is important because it's when a whole handful of states hold their primaries. Some states hold "open" primaries, like Alabama, Georgia, Tennessee, Texas, Vermont, and Virginia. Other states hold "closed" primaries, like Oklahoma. Massachusetts holds a "mixed" primary, so you can change your party affiliation before the vote actually happens. An open primary means that it doesn't matter what party you're registered for, you can vote for whatever candidate you want. So if you're a Democrat or an Independent, you can vote for a Republican if that's what you're heart desires. It's confusing, right? If your state holds a closed primary, you have to vote for a candidate associated with that party. No one said this was simple.

For this reason, Independents are often left out of the primary process. It's not cool. Especially since tax dollars all around go towards the voting process. Independents aren't uninterested, they're just unaffiliated. But when it comes to closed primaries, they are left out of the game if there aren't any Independent candidates. The closed primary is controlled by the Democratic or Republican parties, state by state. In 2000, late Supreme Court Justice Antontin Scalia upheld the system in a 7-2 vote. Scalia said that open primaries violated the parties' First Amendment rights of "free association." He wrote that a primary in which non-party members could vote would be enough to "destroy the party."

It's not an easy road to navigate, which is why both parties rely on grassroots methods to turn out the vote on Tuesday. Especially those states where Independents feel disenfranchised and frustrated enough to just assume they won't be able to cast a vote until November. So the short answer as to whether you can vote on Tuesday if you're independent is a resounding... "maybe." You have to do some Googling to see if your state (or if one of the parties within the state) is willing to take a chance on how much pull unaffiliated voters actually have. No one said this was a perfect system.