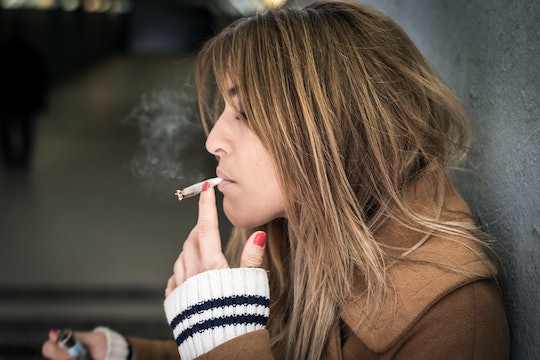 Morning sickness during pregnancy is the worst. You feel hungover all day (because of course it doesn’t just happen in the morning) and you didn’t even get to enjoy the fun the night before. Understandably, you’re probably looking for anything to help ease this terrible feeling you can’t seem to shake during your first trimester. There are plenty of natural remedies to choose from if you can’t afford or don’t want to take the medicinal route of Digles, or Unisom and B6. But what about marijuana? Can marijuana help with morning sickness? And more importantly, is it safe even if it potentially could help?

Doula and childbirth educator Jessica Daggett tells Romper, “It is believed that marijuana can help with nausea. However, hospital emergency departments are seeing an extreme increase in patients (pregnant and not) coming in with what's called ‘Cyclic Vomiting Syndrome,’ which is believed to be caused by excessive marijuana use. So, one may believe they're treating nausea/vomiting with marijuana and landing themselves in the ER with further abdominal issues. So the science is lacking, but we see potential error in that belief that marijuana helps with morning sickness.”

Daggett adds there isn’t a whole lot of information to give a crystal clear picture of whether or not it’s 100 percent safe to use marijuana while pregnant. "What we do know is that THC affects brain function, and when a pregnant mother consumes anything, including THC, it's transferred via placental blood to the fetus. So we can confidently say the fetus is affected, we just don't know how strongly or in what ways.”

Dr. Jordan Tishler, a Harvard physician and cannabis therapeutics specialist with more than 23 years of experience, agrees there’s not enough research on marijuana use and its safety while pregnant yet, but the studies he has seen shows some not-so-great potential side effects for your baby. “About half of the studies show dramatic harms associated with cannabis use during pregnancy, including decreased fetal weight and decreased school performance in later childhood. However, the other half of the set of studies seem to refute these concerns, but all of these studies are flawed and biased,” he notes.

Other potential side effects that some studies have shown include, “gastroschisis (a rare birth defect in which the infant’s intestines stick out of an opening in the abdominal wall), and one study reported an increased chance for heart defects among babies prenatally exposed to marijuana,” according to Mother to Baby. However, the website added, “It can be difficult to draw conclusions from these studies, because most of the women who used marijuana also used other substances at the same time or had other factors that may have increased their chance for these defects.”

Tishler says that overall, it’s pretty clear we just don’t know for sure, but “The American Congress of Obstetricians and Gynecologists has a well researched position paper on this subject, and their conclusion, with which I largely agree, is the risks are unknown, so don’t do it.” So better to be safe than sorry, it looks like.

What about CBD oil? Does that even help with nausea? According to Tishler, CBD oil looks like a no-go, too, because there has been no research done at all on this yet. “CBD oil has no use in treating nausea in general. Despite being the current layperson darling, CBD can interact with conventional medications and might as well with hormones associated with maintaining pregnancy. I would not consider CBD safe.”

Daggett says the reason there hasn’t really been a lot of research on either CBD oil or marijuana yet is because it’s still seen as illegal in most places by the federal government. “Accessibility in the PNW has drastically changed recently due to legalization, and it's believed (hoped) that we'll be able to see more consistent studies and research. However, federally funded research won't be done until marijuana is no longer seen as illegal by the federal government.”

What if you still want to give it a try? Be careful and hypervigilant, because according to Daggett, there are many variables to consider, including “potency, form of consumption, source of product, sustainable growth of product (i.e., organically grown, pesticide/fertilizer use on plants), frequency of use, etc.”

According to Daggett, other natural and holistic remedies for morning sickness that aren't marijuana include “B vitamins, ginger, and citrus. A physician can always prescribe anti-nausea medication, but that, as with any drug, can carry its own set of risks. Unfortunately, there's no sure fire way to completely negate nausea in pregnancy,” she says.

So it looks like there isn’t a whole lot of research done yet to say with 100 percent certainty it’s safe to use marijuana while pregnant, even if it could potentially help with nausea. Do your research, talk to your doctor, and just remember the most important thing — a healthy and happy baby at the end of your pregnancy.