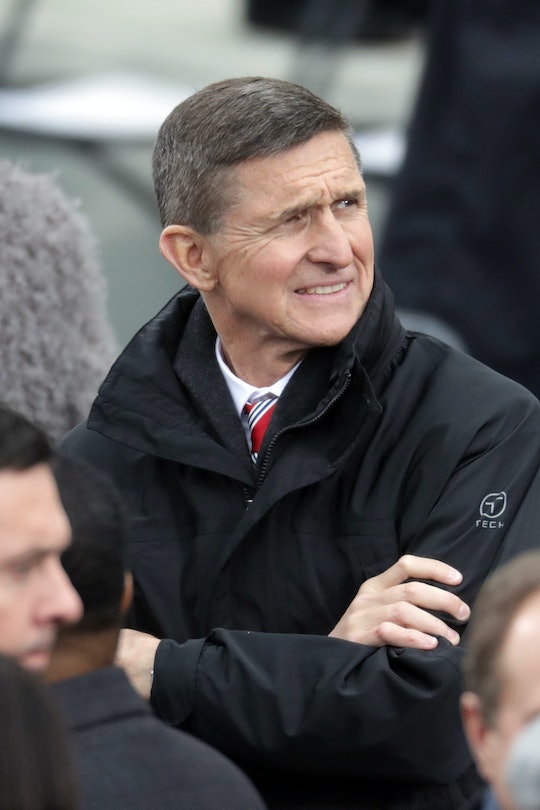 Could Michael Flynn Be Fired?

Between the rejected travel ban, alternative facts, and protests popping off all over the country every time Trump tweets, the new administration has not had the smoothest of transitions. The latest scandal, surrounding the possibility that Trump's National Security Adviser, Michael Flynn, isn't as fascinating as the lack of security at Mar-A-Lago on the surface, but it's much more complex and inherently darker in its nature once you've dug into the topic a bit more. But could Michael Flynn actually be fired if the administration isn't happy with the outcome of this particular controversy? It's a bit complicated.

Update: On Monday night, the White House announced in a statement that Flynn had resigned his post, effective immediately. Retired Lt. Gen. Joseph Keith Kellogg, Jr. was appointed as acting national security adviser in his stead. In Flynn's resignation letter, he apologized for having "inadvertently briefed the Vice President Elect and others with incomplete information regarding my phone calls with the Russian Ambassador."

In case you missed it, Flynn is under fire for allegedly talking about sanctions over the phone with Russian ambassador Sergei Kislyak back in December, before he was officially allowed to. He later reportedly told Vice President Mike Pence that they did not talk about sanctions — and Pence did his rounds on the Sunday morning talk shows defending Flynn's call. But now, it seems that Flynn did discuss sanctions, according to intelligence reports, and Democrats in Congress are beginning to ask for transcripts of the call to see what really went down, despite Flynn himself claiming that he couldn't remember if the topic came up during the conversation to begin with.

There is a law on the books, the 1799 Logan Act, that forbids private citizens from negotiating disputes with U.S. adversaries, though no one has ever been prosecuted under it. Essentially, it's built in to ensure that the country's diplomatic efforts aren't undermined by an unauthorized party. However, according to a report by the Congressional Research Service, only one person to date has ever been indicted under this law. (Kentucky farmer Francis Flournoy was indicted in 1803 of writing a contentious article about establishing a separate nation in the western half of the United States, which was then unclaimed territory; Flournoy advocated that the new nation could ally with France.)

In Flynn's case, Democrats fear that Russia got the impression that the Obama-era sanctions (put in place in response to Russia's invasion of Ukraine) were too harsh. If those same Democrats keep pushing, however, they may eventually force Flynn to resign under pressure. On another level, Trump himself could ask Flynn to step down if he feels like he can't trust him, though so far, there's been no evidence that this would happen.

There's no official word yet about Flynn's fate. Trump advisor Kellyanne Conway told reporters from NBC on Monday that Flynn had the "full confidence of the president," but Press Secretary Sean Spicer had a different story. He said, "The president is evaluating the situation. He is speaking to Vice President Pence relative to the conversation the vice president had with General Flynn and also speaking to various other people about what he considers the single most important subject there is, our national security."

So it's anyone's guess as to how serious the situation is.

Officials said that Flynn has reportedly apologized twice to Pence for allegedly lying to him before he went on national television to talk about the phone call. Although national security and diplomatic relations with Russia (not to mention whether it was proper for a civilian to negotiate with a foreign country about economic matters) are supposed to be the real issues, it looks the real issue might be Flynn's relationship with the president.

It's no good for a national security advisor to be caught lying to the vice president — Flynn essentially made Pence look like he had no idea what he was talking about on national television. No one wants to mess with the egos of the president and his right hand man. Trump ran on the idea that he is a great manager who runs a tight ship. He's supposed to be the best, right?

The optics, if you will, of Flynn's fibbing to Pence about the call aren't great. Right now, the general's only hope might be that the optics of firing the national security advisor within a month of the inauguration are worse.