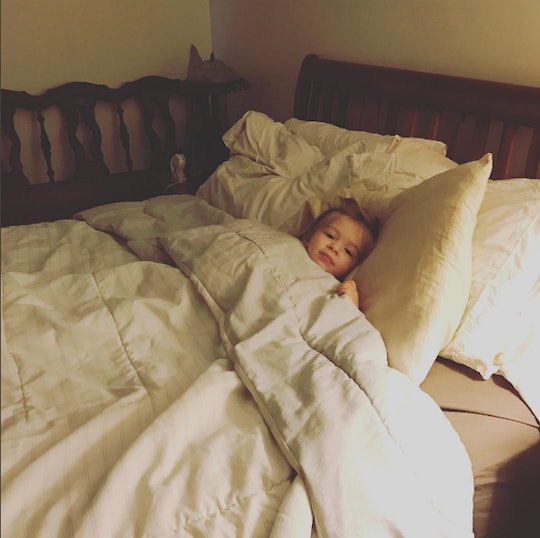 If there's one thing I've learned as a parent, it's this: when you're sleep deprived, you'll do anything to get your toddler to lay down and close their eyes. My own 2 year old is a firm believer in fighting like hell at bedtime, unless she's incredibly exhausted. She sleeps through the night, but those 30 minutes between the end of the last book and when she passes out are pretty intense. (And frustrating.) There have been so many times that I've tried to lay her in my bed with me, but can my toddler bed-share? Experts think that bed sharing with a baby can promote closeness and a physiological connection, but is it OK to do with toddlers, or do they need to be in their own bed?

Let's make one thing clear — toddlers can't bed-share if you think that term means actually sharing a bed. My own 30 pound child takes up half of the bed, sideways, and leaves her parents hanging on to the edge of the mattress like we're in some kind of wilderness survival series. But bed-sharing with your toddler? It's not unheard of.

A 2011 study published in Pediatrics examined the bed sharing between mothers and toddlers and how it affected the behavioral and cognitive outcomes of the child. The study mentions that while bed sharing isn't advised by the American Academy of Pediatrics when a child is in infancy, by the time a child is a toddler, the risk of SIDS is no longer there, meaning bed-sharing can be safe for you and your toddler.

And bonus? The Pediatrics study found that there were no negative behavioral or cognitive outcomes associated with bed sharing with your toddler. The research was conducted with a diverse group of low-income families with children ranging in ages from 1 year old to 2 and 3 years old and found that black and Hispanic families were more likely to bed share than non-Hispanic white families. Researchers focused on a child's behavior and cognitive output by the time the children reached the age of 5 years old and, when they took out other attributing factors like gender, socioeconomic status, and ethnicity, they found that there was no correlation between bed sharing and behavioral and cognitive output.

Your toddler, however, shouldn't bed share with you if there's also an infant in the bed. The Mother-Baby Behavioral Sleep Laboratory at University of Notre Dame noted that it's not safe for a toddler and infant to bed share together as a toddler has no awareness of the baby or responsibility to sleep safely next to them. But if you and your toddler are going to be snoozing together, it's definitely OK. It doesn't mean your toddler will never be able to sleep without you or that you're turning them into a co-dependent adult in the future. If it works for you and your family, it works, and that's all you need to know.

Oh, and you're probably going to get kicked in the head by toddler feet and be sweaty all night as they crawl all over you. Now that's all you need to know.