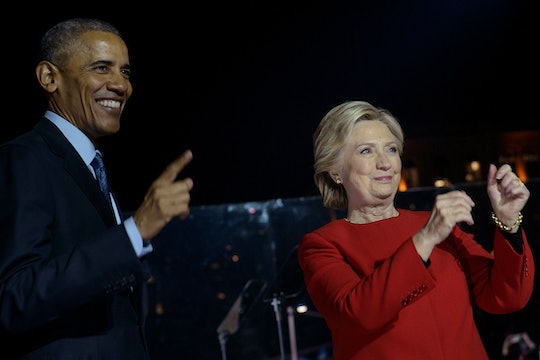 The 2016 election results are disheartening and have many wishing President Obama could take on just one more term. But how far can Obama's power go? Can Obama keep Trump from becoming president?

He may be a total bad*ss, but Obama can't stop Republican presidential nominee Donald Trump from becoming president if he wins the 270 electoral votes needed. According to The Independent, the 22nd Amendment of the United States constitution states that no person can be elected to the office of President more than twice. If you remember your history books, this amendment was put in place after President Franklin Delano Roosevelt finished up four terms of his presidency. As a Democrat, he was having great success and the Republicans in Congress decided, you know what, let's put an end to that.

But while Obama may be POTUS, he's not above the law. NPR noted that even though Obama has said he thinks he could win again if he ran for president, he knows it's not possible and will follow the laws.

I mean, did you expect anything else from such a classy president?

According to NPR, there have been plenty of conspiracy theorists saying that they think Obama will somehow make himself "president for life", but really, it's not possible. Nor is it possible for Obama to simply force Trump out of the White House and retain his seat in the Oval Office.

Instead, all Obama has been able to do to prevent a Trump presidency is to campaign for Clinton. According to NBC News, Obama has been adamant about fighting against Trump's xenophobic and racist remarks, noting that America has always been full of diversity and it deserves to remain that way for its citizens. In fact, NBC noted that it's not usual for a second term president to campaign so diligently for his replacement, but it seems Obama has America's best interests at heart with his steadfast loyalty to Clinton and her campaign.

But, no matter how much he doesn't want Trump to be president, Obama can't say no. There is a law to uphold and regardless of the outcome, Obama has to follow it. More importantly, Obama would want to follow it because he doesn't feel he's above the law and because he's exactly who he seems to be — a classy, graceful president.

The New York Times reported that despite Trump's whining about rigged elections, Obama said that if Trump won, Clinton would give her concession speech, and Obama would then escort Trump to the capitol to transfer power. Even though I think everyone wishes Obama would escort Trump and then say, "Nah, just playing, get out of here", the truth is, he can't and won't. Instead, he'll represent everything that is wonderful about America and close out his presidency like a class act.