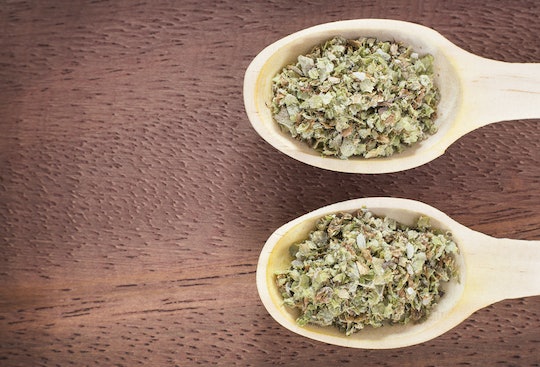 If You Want To Induce Labor, Oregano May Be Just What You Need

When you're hugely pregnant and tired of it, you'll try just about anything within reason to go into labor. I remember walking to what felt like the moon and back to try to shake out my son. Basically the only thing I didn't do was try pizza, but I hear it works. Specifically, I hear oregano works. So can oregano induce labor?

By now, most have heard about the magical eggplant parmesan recipe that supposedly makes babies shoot out of their mother's birth canals like some sort of human slingshot. There are also plenty of mom blogs out there dedicated to recipe after recipe for things like pizza, chicken parmesan, Greek chicken, and even tea, all made with tons of oregano, that are purported to have the same effect.

The science behind it is shaky at best, though. While it's been pretty common practice in Mexico for centuries to use oregano as a means to start labor and contractions, the scholarly research isn't really there, noted American Family Physician. However, it is considered an abortifacient by means of inducing contractions, according to the Journal of Toxicology, so, at least anecdotally, it's plausible, but the amount of oregano it takes to be considered an abortifacient is extreme. The concentration of oil of oregano you'd have to eat would be around 18 plates of the eggplant parmesan — in one sitting — and quickly, by my calculations, for it to even approach a clinical level.

However, over 300 women have claimed that it's worked for them, and there are even OB-GYNs who suggest giving it a try, like OB-GYN North. (To be clear, they mean one serving, not Kobayashi-ing 18 plates of it.) Parmesan is a delicious dish — well, not eggplant parm, that's the slimy vegetable version that's been pulled from the underbelly of a slug and then slid between the seats on a crowded subway car (personal opinion) — but a chicken parm sandwich is a delight, and if you add chopped cherry peppers, you're also covering the "spicy foods induce labor" old wives' tale. I can't imagine a more delicious way to shoot a kid out of your lady cannon than by welcoming contractions with a hero sandwich and pizza. Just brush your teeth and maybe gargle before you hit the hospital — there's no need to offend anyone with garlic and onion breath during all the huffing and puffing.