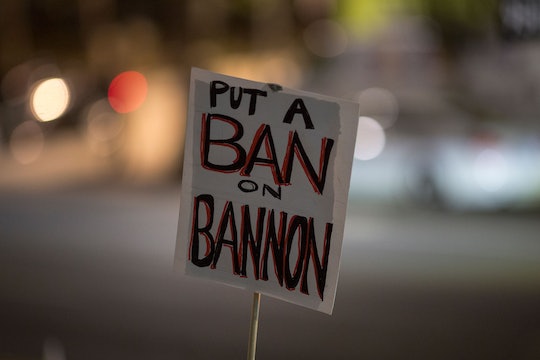 President-elect Donald Trump’s controversial decision to appoint Steve Bannon as his White House chief strategist has sparked a widespread petition, which has reportedly gotten nearly 270,000 signatures already, in an attempt to keep the former head of Breitbart News and influential figure in the alt-right movement out of the White House. The petition itself has gained a lot of traction and attention, but many may be wondering how much power those signatures might have. So, can a petition actually stop Bannon from becoming Trump’s chief strategist? It might a long and challenging battle, but people are voicing their concerns.

One of the multiple petitions launched was started by the Southern Poverty Law Center, a national organization dedicated to fighting back against hate and bigotry, condemning Trump’s decision and got started shortly after the announcement was made on Sunday. The organization, which also took out a full-page ad against Trump in The Washington Post, declared that Bannon has "no business in the White House."

Although Bannon’s resume may look quite impressive on paper to some, his past work and alleged behavior has gotten him reputation as a guy who’s allegedly a misogynist, anti-Semite with ties to white nationalism.

"Donald Trump has brought white nationalism unvarnished into the White House," Southern Poverty Law Center representative Mark Potok told The Huffington Post. "His first appointments [to his cabinet] have underlined how divisive he really is."

When you consider Bannon’s how divisive and harmful rhetoric has been over the years, it becomes an understandable concern that many want to keep him out of the future president’s ear. But just how effective can this petition be?

To add a bit of perspective — since 2011, as The Huffington Post pointed out the White House has responded to more than 200 online petitions. The petitions have included issues ranging from legalizing gay marriage to deporting Justin Bieber.

Petitions now submitted to the White House now require 100,000 signatures, a vast increase from the previous 25,000 signature threshold for Congress to consider them. But this process to put a stop from Bannon becoming Trump's chief strategist could be a bit different as it doesn't apply to him because he's not actually a part of the Cabinet.

According to Heavy.com, "Bannon will be considered a member of Trump’s personal staff, and these picks do not require approval from the Senate." Because of this, Trump can appoint anyone he wants and unfortunately there’s not much that can be done by the public to change that.

Legal fine print and barriers make this a very difficult hurdle for opponents of Bannon to succeed. But, if there's a will, there's a way because one of the greatest things about living in a Democracy is that you can fight for your beliefs, no matter how far out of reach it might be.