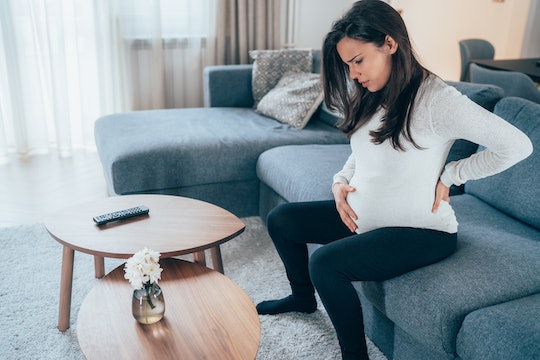 Can Pregnancy Cause UTI Symptoms? Experts Weigh In

Pregnancy is wrought with a myriad of annoying, unexplained symptoms. Because everything in your body is changing, it can often be hard to distinguish normal pregnancy pains from signs of common illness like a urinary tract infection (UTI). But can pregnancy cause UTI symptoms? Experts say it's sometimes hard for expecting moms to tell exactly what's going on down there.

"Hormonal changes during pregnancy lead to an increase in the likelihood of UTI and its complications," Dr. Neetu Sodhi, an obstetrician-gynecologist at Providence Cedars-Sinai Tarzana Medical Center tells Romper. "These changes, along with difficulty with hygiene due to the interference of an enlarged pregnant belly, make UTIs the most common bacterial infections in pregnancy."

Certified family nurse practitioner and assistant director of the online Doctor of Nursing Practice program at Maryville University, Mariea Snell tells Romper, "The expanding uterus can cause a woman to feel an urgency to urinate." While this phenomenon is benign, it can create concern if you've dealt with a UTI before and the sense of urgency feels familiar to you. "This is a common symptom of UTI as well, so it can be confused for infection when it is just pressure," Snell says.

If pressure or pain combined with frequent bathroom trips has you calling your doctor's phone at all hours of the day, you're not alone. During my second pregnancy, I was diagnosed with a UTI shortly after an urgent call to my OB-GYN questioning the urgency of my restroom visits. Although I was no stranger to this common pregnancy issue, I knew something was off when I felt like I just couldn't empty my bladder. Sure enough, I had an infection and needed some antibiotics to knock it out.

Experts say that it can sometimes be difficult to distinguish the symptoms of a UTI from typical pregnancy aches and pain. "A growing fetus places pressure on the maternal bladder and that can lead to urinary frequency and urgency that are very common symptoms that overlap with urinary tract infection," Sodhi explains. Among these symptoms, Snell says, are "pelvic pressure and low back pain," both of which "are common symptoms in pregnancy that are also experienced during UTI."

However, there are a few key signs and symptoms, not caused by pregnancy, that might point your doctor in the direction of running tests to determine if there is any bacteria in your urine that indicate the presence of an infection. "Other UTI symptoms not normal for pregnancy include dysuria (painful urination), fever chills, and low back pain," Sodhi tells Romper.

Even if you experience UTI-like symptoms, they may turn out to be nothing more than benign pregnancy side effects, but it's still important to let your doctor know what's happening. "Report all new onset urinary changes to your obstetrician," Sodhi says. "The goal is to recognize and treat a UTI right away to prevent complications."

Although the symptoms of a UTI during pregnancy can sometimes be mistaken for common aches and pains, an ounce of prevention can go a long way toward ensuring that you won't have to deal with the potential complications of an infection on top of everything else your body is going through. "The most important thing to do to prevent UTI is to drink lots of water and urinate frequently," Snell tells Romper. "It is also important to urinate before and after intercourse."