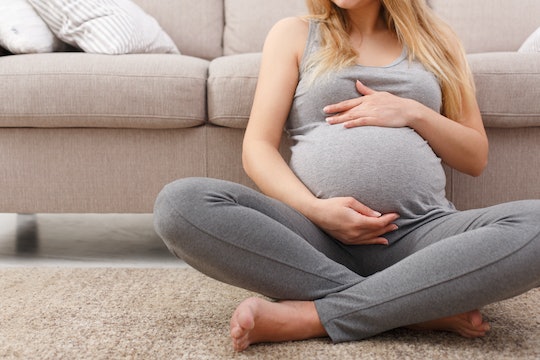 Real Moms Share How Pregnancy Made Them Feel Totally Touched Out

Pregnancy is an exciting time, but it also brings a slew of changes, many of which are entirely unexpected or not often discussed. You might develop aversions to your favorite foods, constant nasal congestion, or even sensitive gums. If that's not enough, some women even wonder why they don't want to be touched when pregnant. Even if you don't already have a toddler constantly touching and grabbing you, the fact that there is a baby inside of your body can feel like the equivalent of being touched all day. So, can pregnancy make you feel touched out? For many women, it can feel exhausting.

The first thing to know about feeling touched out is that it is a completely normal and common feeling. Feeling like you want personal space and alone time is not something to feel ashamed or guilty about. When pregnant, and often for a long time afterwards, mothers are the vehicle that babies go everywhere with — it can be hard to manage, especially for those who need some time alone to recharge. It's common to feel as though you want your body back for yourself, even if you're excited to be pregnant and to be a mother. As noted by La Leche League (LLL), it’s a strange phenomenon because, along with the irritation, comes the guilt over feeling irritated by your loved ones.

Each mother has a different limit she needs to reach before feeling touched out, and each mother will deal with those feelings in different ways, LLL continues. Katie D., 34, tells Romper that she feels closest to touched out at the end of the day, especially when strangers are touching her belly. "It really makes me feel like my body is not my own, particularly when being pregnant already makes it seem like my body has a mind of its own," she says.

Rebecca P., 33, tells Romper that having a toddler while being pregnant only adds to the touched out feeling. "Even after I get my child to bed at night, I still don't really feel like myself, and I definitely don't want to be touched," she says. "It all feels like too much sometimes." This is common, noted LLL, as "days can be chaotic and sometimes leave you feeling touched out." It can sometimes feel like a constant battle to repossess your own body.

For a lot of pregnant women, aversion to touch can be a very real symptom. It ranges from slight aversion to touch to avoidance of intimacy or affection to straight-up feeling sick when touched. Though it typically goes away after pregnancy, it can be a confusing time for these women and their families.

It helps to be honest and upfront about what you're feeling, and allow yourself to feel that way. Once you acknowledge what you're feeling, you can begin to think about what might help you feel better. Many women who are pregnant relish the thought of sleeping in a bed alone for a night. Other women might just need a long shower or bath, or an afternoon out alone to do something nice for themselves.

The biggest thing is to relieve yourself of the guilt you may feel by being touched out — it doesn't mean you are, or will be, a bad mother. People have varieties of tolerances to touch, and having a higher or lower tolerance doesn't mean one is better than the other. Knowing yourself and your needs will only serve to strengthen you as a parent. As they say, you have to put on your own oxygen mask first, before you can help your kids.