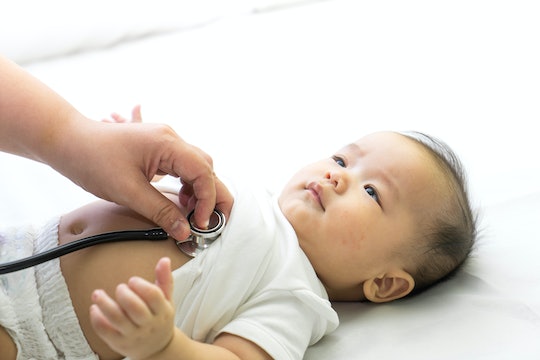 So far, 2019 has been a record-setting year, but for the wrong reason — measles outbreaks are spreading through 22 states around the U.S., with 704 cases confirmed by the Centers for Disease Control and Prevention this year. This is the highest number of cases reported since 1994, and with some children under 1 year old being affected, parents are nervous. But can the measles vaccine be given early?

Measles was considered eliminated from the U.S. in 2000 thanks to the measles, mumps, and rubella vaccine, or MMR, but has regained traction as more families choose not to vaccinate. According to the CDC, of the 704 reported cases, 503 patients were unvaccinated, 76 patients had at least one of the recommended two rounds of vaccinations, and 125 patients had unknown vaccination status. The majority of patients were children age 16 months to 4 years, but infants from newborn to 15 months were also affected.

The CDC says most of these outbreaks are occurring in close-knit communities where a number of people are unvaccinated, which happened within Orthodox Jewish communities in 2018, after a traveler contracts the illness abroad and returns home.

Measles is spread via coughing and sneezing and is highly contagious. But should your kids be put in a bubble? “I think the best thing parents can do is make sure they are immunized, their children are immunized, their babysitters are immunized, and the children at their child’s daycare centers or schools are immunized,” Mobeen Rathore, MD, chief of pediatric infectious disease and immunology at Wolfson Children’s Hospital of Jacksonville in Florida, tells Romper. But for babies who aren't old enough to get vaccinated, can you give them an MMR dose early?

The MMR vaccine is usually given in two doses: the first at 12 to 15 months of age, and the second at 4 to 6 years of age. During his interview with Romper, Rathore said it can be safely given to babies even younger when deemed necessary.

“It’s not a safety issue, but an issue of effectiveness. There are some parts of the world where measles is much more common, and the vaccine is given at 9 months, and in rare cases is given at 6 months of age. Even in the U.S., we recommend sometimes that the vaccine be given at 6 months if the infant will be traveling somewhere where it’s common to have measles. But that vaccine is not counted toward the two required vaccines for immunization. In situations where there’s an outbreak, we could do that to protect the younger children, but it would depend on the recommendations of the CDC.”

“A baby can have an MMR vaccine as young as 6 months,” says Betsy Marks, MD, a pediatrician and internist practicing in Albany, New York, in an email interview with Romper. “However, this vaccine will not count towards their primary series, and they will still need another shot at 12 months, but it will confer immunity in a high-risk setting.”

Vaccines can be declined for religious, moral, or philosophical reasons, and laws around unvaccinated children attending public schools vary by state. The idea that vaccines are related to autism makes some parents opt out of vaccinating their kids, despite the overwhelming evidence since that proves this theory wrong. “The MMR vaccine does not cause autism, and it was a really unfortunate study from years ago that caused this concern among parents,” Rathore says. “But we know MMR does not cause autism. The vaccine is safe. It’s effective. Measles is a very contagious disease and can have fierce consequences. It’s important we all be aware of that and do everything in our power to protect our children.”

Some of those complications of measles include ear infections, pneumonia, and encephalitis. Rathore treated patients during a measles outbreak in Jacksonville, Florida in the early 1990s, some of whom experienced these firsthand. “Back when we had the outbreak in Jacksonville, we had some young adults who got very ill. We had one young person who was on a ventilator for weeks. It can affect any age, but the younger age group is who we would be most concerned about,” he says.

The MMR vaccine generally takes about three to four weeks to be effective. Parents near measles outbreak sites who are worried about their babies should speak to their child’s pediatrician about how to best protect little ones.

“You should really talk to your pediatrician,” says Rathore. “It also behooves parents to demand their children be protected by the childcare center’s or school’s policies. There are children who are too young or are not responding to the vaccine — about 5 precent of children and adults will not respond to the vaccine and will not be protected. It’s important that parents are involved in making sure not only their child is protected, but their community is protected.”

For children too young to be vaccinated, Marks says it’s crucial that parents keep them away from areas where outbreaks may be occurring. “The only way to protect a child that is too young to be vaccinated is to avoid taking the child out in public in endemic areas. There are no homeopathic or natural ways to prevent measles. And an unvaccinated person, child or adult, that is exposed to measles has a 90 percent chance of contracting the disease,” says Marks.

The CDC also recommends adults who are unsure of their vaccination status speak to their doctors, because there is no risk associated with additional rounds of the MMR vaccine.