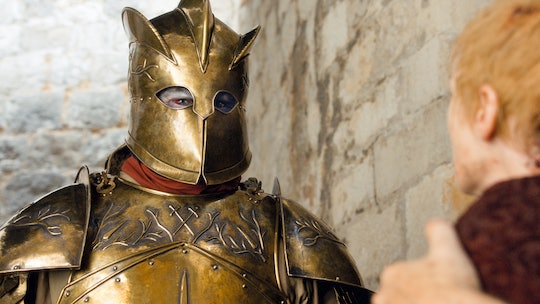 Can The Mountain Talk On 'Game Of Thrones'? He Did Take A Vow Of Silence

The season premiere of Game of Thrones did more for fans than expected, touching on the much missed stories of almost all of the major players were present and accounted for. Still missing, though he was ever present in the Season 5 finale, was The Mountain, a.k.a. Gregor Clegane, one of the fiercest warriors of Westeros. Last we saw, he was a scarier, silent, Franken-Mountain version of himself. As it stands, you might be wondering if The Mountain can talk on Game of Thrones? Or is he — like the maester of the Citadel, Qyburn, told Cersei — to remain silent until all of King Tommen's enemies are dead?

It honestly just sounds like a cop out. You know, like when commitment-phobe boyfriends assure their girlfriends of things that they have no intention of ever doing. This is Qyburn's way of avoiding the fact that The Mountain probably has no ability to talk. If you remember Cersei's visit to Qyburn in Season 5, he had someone laying on the table in his lab, covered in a sheet, who was — presumably — The Mountain. The same Mountain who we'd seen episodes previously die in combat with Oberyn Martell. So yeah, Franken-Mountain is pretty accurate.

If The Mountain can talk, now that he is this newer, bigger, and scarier version, then it won't be anything close to his former self for sure. No one gets brought back to life by a glorified scientist, undergoing several Westeros-style blood transfusions, and is their normal former self. As it was, The Mountain was already pretty much evil, lending to the fact that any sort of brain he had wasn't good to begin with. Plus, those red eyes and sickly grey skin of his peeking out through his metal knight's mask certainly don't help.

Chances are, The Mountain can't talk and won't talk and will just serve as the scary ass knight to lead the Lannisters to take back King's Landing and be the bad ass ruling family they once were.