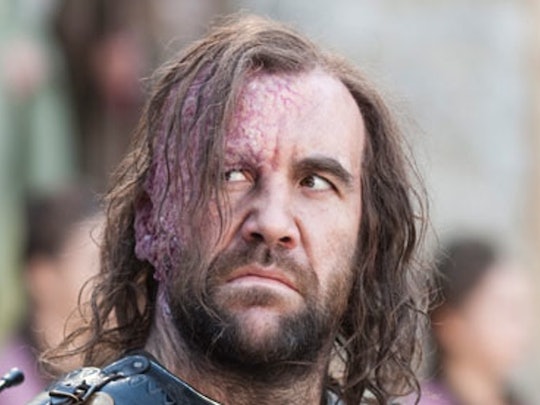 Will The Cleganebowl Happen In 'Game Of Thrones' Season 6? It Will If This Theory Is True

Of all the characters we have loved, and lost, and mourned, and quickly gotten over on Game of Thrones, there are few who were so morally grey that we're almost awful people for hoping for the return of them. When it comes to The Hound, though, that's the way it is. And whether or not the Cleganebowl happens in Game of Thrones Season 6, he's still someone we're no doubt still holding out hope for.

From the moment he saved Sansa from being raped in King's Landing, The Hound, né Sandor Clegane, was someone to think of as more than just another muscle for the king, unlike his brother, Gregor "The Mountain" Clegane, who is literally all muscle for the Lannisters and pretty much no brain. Unless you count the one inside of his head that barely functions after being brought back to life. And no, I don't count that one. But it would make sense that we should get to see a battle between these two brothers who are enemies really, since Gregor is the one who, as a child, mutilated Sandor with fire. Remember when Sandor was telling Arya all about his fear of fire and how his awesome brother is the cause of the trauma? Yeah, I didn't think I would ever get choked up while feeling sorry for the Hound, either. Basically, he just has a soft spot for Stark girls.

The theory of the Cleganebowl is that a fight to the death will happen when Cersei demands a trial by combat in order to get her out of that crazy mess she's currently in. You know, the one caused by having a part in murdering her husband and all of the incest with her brother. That mess. Anyway, as the theory goes, she will demand a trial by combat and name The Mountain as her champion. The Hound will turn up as the champion for The Faith and then we will finally have the Cleganebowl, which too many Redditors and internet forum participants have long waited for. And comparing it to a Super Bowl-esque situation, since the two are kind of the biggest (literally and figuratively) warriors on Game of Thrones, is kind of a perfect assessment.

While there has not been any sighting of The Hound in the season 6 trailer for Game of Thrones, Rory McCann, who plays The Hound and is 6'6" tall in real life (so yeah, pretty scary no matter what), has been spotted lurking around the set of the show and at the local Belfast hotels that the cast and crew of Game of Thrones are known to frequent. So, do not count The Hound out of the game. There is also the matter of never actually seeing him die, but just left for dead in the remote hillside, even after begging for Arya to end his life.

But after getting to know him while watching him travel with Arya and develop an actual connection and affection for her, we all know that The Hound is a lot more than a nearly seven-foot-tall brute. So yeah, maybe the theory of the Cleganebowl was born out of desperately wanting him to return because he is loved by so many — or at the very least, loved so much more than his brother. But it would definitely fit in with the stories of season 6 of Game of Thrones and make for a perfect comeback. And everyone loves a good comeback, right?