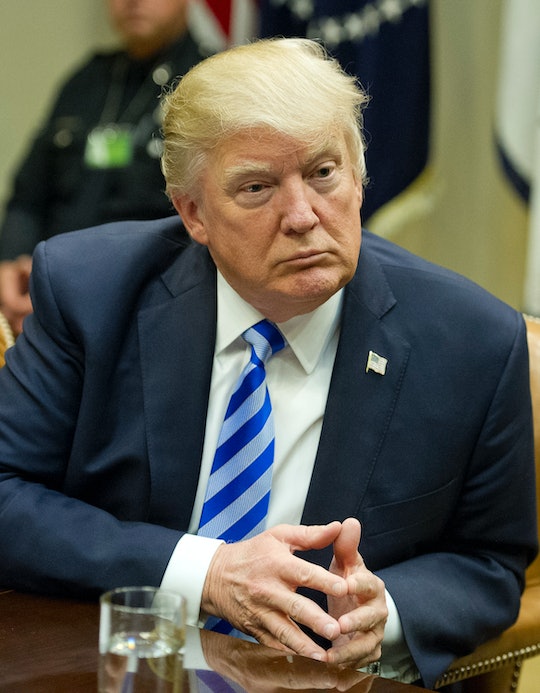 Unfortunately, This Title X Law Is Here To Stay

President Donald Trump signed a bill behind closed doors today. This, in and of itself, is noteworthy. Trump tends toward flashing lights and megaphones and as much attention as one person can get whenever he makes a decision. Yet this bill, the one that repealed the Obama-era protection of Title X funding, was signed quietly. Why? I'm only hazarding a guess here, but perhaps Trump felt that repealing the new Title X law might not go over so well with a certain group of Americans. Like women, and anyone who thinks women should be able to make decisions with their own bodies. Those kind of special interest groups.

This law to protect Title X funding at the state level was the last to be signed by former President Barack Obama. It protected federal funds from being withheld on the state level from health-care providers who might also provide abortion services. Because of the Hyde Amendment (a 1974 law that ensures federal funds are not ever used for abortion services), not a dime of Title X funding can be used for abortion services. Quite the opposite, in fact. According to the Health and Human Services website, the bill (which was introduced in 1970 under President Nixon) is unique:

The legislation signed by Trump on Thursday looked as though it might not get very far; Just last week, Vice President Mike Pence and GOP Sen. Johnny Isakson had to be brought in as tie-breakers to pass the law. Pence is a loud and proud anti-choice advocate who clearly took a considerable amount of pride in signing a bill that could give states the choice to limit funding to health-care providers without penalty.

But can Trump actually undo this Title X protection of federal funds? Unfortunately, it seems he can. By invoking the Congressional Review Act, which gives lawmakers the ability to undo any regulations that were passed during the previous administration's final few months with a majority vote, Trump was able to repeal Obama's final law. Because the law was passed by a slim majority (51-50) under the Congressional Review Act, which only requires a majority of votes to overturn the law, opposing lawmakers were unable to filibuster. Trump's signature effectively sealed the deal on ending the Title X protections put in place by the Obama administration.

So what's left for those unhappy with the bill's passage? Democrats and Planned Parenthood activists may hate the law Trump just signed, which undoes those crucial Obama-era protections, but they can't just wave a wand and make it disappear; Effectively, Democrats would have to introduce their own legislation to counter Trump's — because once something is signed by the president, Congress is mostly powerless to pull it back. The only other option, for now, would be to challenge the law as unconstitutional — but again, that's a long and tricky process Democrats likely don't want to take under their collective wing.

So what does that bill, signed behind closed doors with nary a whisper from the generally Twitter-happy president, mean for health care providers and the men and women they serve? According to the Planned Parenthood website, the biggest danger of this bill is that it "emboldens states to prevent use of Title X funds at a health center just because it also provides safe, legal abortion."

Title X funding helped four million Americans in 2015 through 4,000 health-care facilities, according to a survey by U.S. Health and Human Services. Those funds (and can we just say, yet again, that none of the funds were used for abortion services?) offered low-income and uninsured individuals with preventative health care like access to birth control, pap smears, STI testing, breast exams and other cancer screening, as well as contraception education. Title X funds have been proven to help prevent unwanted pregnancies and thus potentially negate the need for some abortions as well, which should be noted.

Speaker of the House Paul Ryan called this bill a "major pro life victory," according to CNN. Whose life does he mean, precisely?