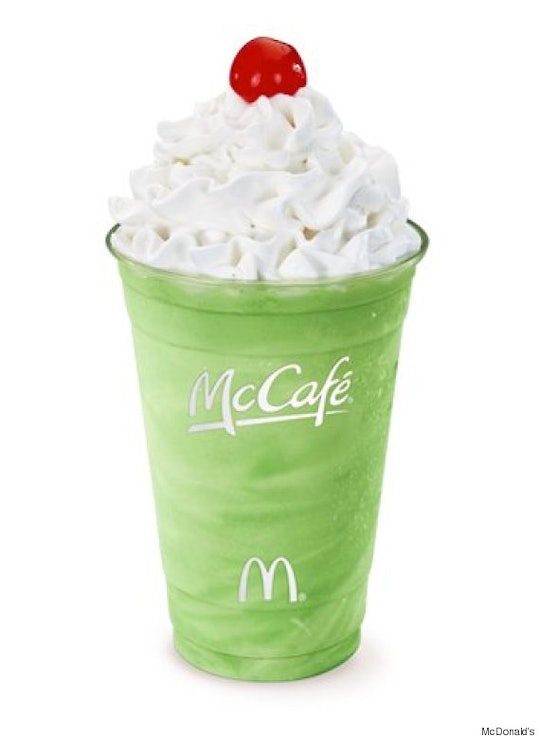 Can The Shamrock Shake Increase Your Milk Supply?

March is a time of leprechauns, pots of gold, and McDonald's Shamrock Shake. That last one makes people legit excited to run to the nearest McDonald's, but is it more than just delicious? For breastfeeding moms, can the Shamrock Shake increase your milk supply?

Janice Campbell, lactation consultant at South Nassau Communities Hospital, tells Romper that your milk production is based on one simple idea: supply and demand. You can't make milk without having a demand for milk, which is created either by pumping, nursing, or a combination of both. Meaning if your baby doesn't nurse very often and you aren't doing anything to remove the milk from your breasts, your breasts aren't going to continue producing milk at a higher demand. And a Shamrock Shake, no matter how delicious, doesn't exactly tell your body that you have a hungry baby and need to make more milk.

International Board Certified Lactation Consultant (IBCLC) Nadine Fournier tells Romper that galactagogues, while not always proven by science to increase your milk supply, can have a placebo effect on breastfeeding moms. Some assume that the galactagogue will increase their milk supply, so they are more relaxed when breastfeeding and see a change in milk production as they deal with less stress.

IBCLC Kristen Gourley of Lactation Link agrees. "Being relaxed can help with milk let-down because oxytocin doesn't release as easy if mom has high stress and thus cortisol levels," she says.

So will the Shamrock Shake magically increase your milk supply? Probably not. But if it makes you happy to have one, if you find it delicious and are excited to indulge, you could help increase your own milk supply. But if you're truly worried about your milk production, reach out to an IBCLC for help. Trust me, they know what they're doing better than a McDonald's Shamrock Shake does.